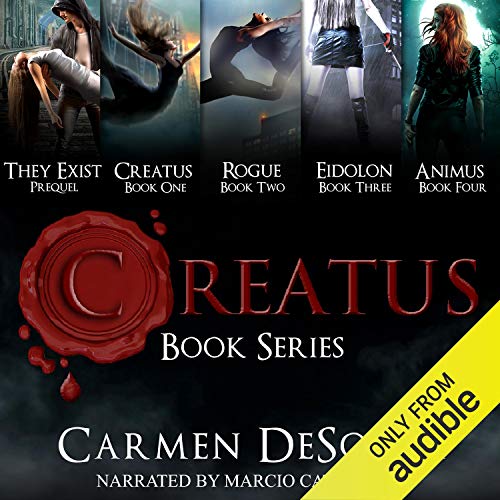 Many questions surround the origin of these sentient beings who are stronger than humans, eat differently, and live longer. But they were created just as we were, maybe even before us. It is from them we obtain our fairy tales - and our nightmares. They are the reason we believe in superheroes - and monsters. Because...they exist.

In the past, creatus kept the human race safe from an anonymous distance. But now, one creatus will endanger them all by falling in love - with a human. In his quest to protect the woman he can never have, a twist of fate propels him into a new role that will cause dissension among his family, igniting a war.

The Creatus series is not your normal paranormal story...it's a realistic supernatural romantic suspense based on the myths you've heard your entire life. Prepare to believe....

"This story is completely unique, and is definitely not generic sex and vampires. In fact, I think Creatus will redefine the paranormal genre. Creatus has intrigue, suspense, romance, and tremendous depth." (Top #50 Amazon Reviewer Vine Voice)

"This book could easily classify itself as romance/mystery/suspense/thriller.... I'm not a big Twilight fan, but I did enjoy the first movie.... I found Creatus reminding me somewhat of Twilight, but with actors I loved." (New York Times and USA Today best-selling author Linda S. Prather)

"....well written, compassionately told, and creates characters that make you want to know them better. It is the foundation for a great series, and I believe it will be quite popular." (Sweet Mystery Books)

Loved this one and think it is fabulous the entire series can be purchased together!!! Definitely a book series for those that love the supernatural!

If you could sum up Creatus Series Boxed Set in three words, what would they be?

What was one of the most memorable moments of Creatus Series Boxed Set?

When Matthew was describing Margaret's research and the results.

Have you listened to any of Marcio Catalano’s other performances before? How does this one compare?

I have never heard Marcio Catalano's before, but he has a beautiful voice and portrayed each character with distinction.

This book set was too long to listen to all in one setting, but I listened for hours at a time. It kept my interest.

I really enjoyed this book. I had no idea what Creatus was, but I liked Marcio's voice and decided to try it. I was not disappointed.

This collection is so worth reading there were so many unexpected turns I can usually vision how the story goes but this collection was very well written and just a relaxing journey to go on with the charictores.

Loved it, really would like to read about the other characters also. Hope they come out soon.

This is a great series! I very much enjoyed listening to them! Can't wait for more...

I listened to 23 chapters over 5 days! Not because of lack of time, but because I kept giving up and going back hoping it would get better, you know, like a bad relationship, and like all bad relationships there comes a time when you MUST throw in the towel to save yourself, and LORD help but this book was exactly that! The narrator was HORRIBLE! from his constant mispronunciation of words like “liberry” for “library” and “liberian” for “librarian” to his loud wet swallowing of his spit, to his voice portrayal of the males (weak no inflection or change to differentiate) to his run on sentences. He read a chapter in one sentence I was confus

Different, in a great way!

Wow, this was one heck of a good series. Great characters they were dynamic, interesting, grew with the story, they were like real people. I was enamored with this series, I couldn’t stop listening to it, everything I did, I was listening. This was a first for me with this Author, but I will be reading more from her.

I liked it. There were times I had to back up and relisten because of the multiple characters’ plot lines but really, it’s not that confusing. I tend to be busy while listening and don’t pay as much attention as I should for such an involved story. It has an acceptable ending BUT there is an impending future that the author states will be continued. Marcio Catalano has a great narrative voice for all the characters except Jonah. He did sound a bit wimpy. 👍🏻👍🏻 Two Thumbs Up!

A New Mythology For An Ancient Myth

I have read other books by Ms DeSousa and like the tales she weaves. This is a good series; I was gripped and intrigued by certain aspects of these stories, there are plenty of characters who made me flip my view 180° as their stories developed and I enjoyed seeing the various relationships blossom and take a hold.

i really enjoyed all' this books! i liked them all

really beautyfull full of romance and some Happy endings !... the Reader was really good and i would advice this book 😁enjoy It and have fun!