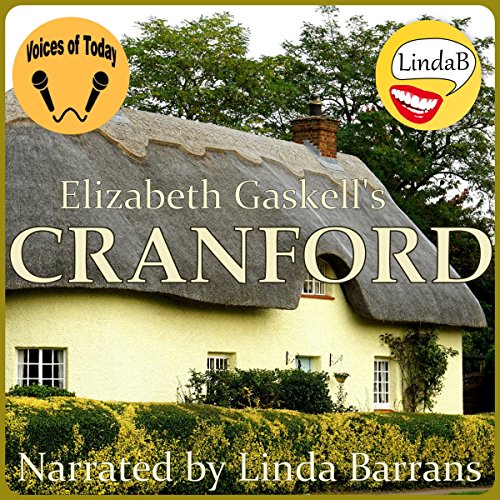 "In the first place, Cranford is in possession of the Amazons; all the holders of houses above a certain rent are women." This is how our guide and narrator, Mary Smith, introduces us to the small English country town of Cranford. Young, modern Mary gives us her Austen-like view of small-town customs, Victorian values, decorum, and etiquette. Mary gives us a charming, sometimes gently mocking comedy of manners. The book is full of character and of characters - the most unforgettable being Miss Matty, the sweet, timid younger daughter of the old rector, a middle-aged spinster in reduced circumstances after a life lived in the shadow of her indomitable, clever sister, Deborah.

There are men, too - despite the opening lines: Mr. Holbrook, long ago rejected by Miss Matty's family as an unsuitable suitor (comparison with Jane Austen's Persuasion is irresistible); and Peter, Matty's brother, thrashed by their rector father for an unsuitable jape, who ran away to sea and died in India. Or did he?

This sweet, funny, heartwarming book is a series of vignettes, sometime hilarious, sometimes deeply moving - and always uplifting. It is a book about kindness and generosity: We meet the delightfully artless maid Martha, who, shockingly, nudges a guest when they are too slow in helping themselves to food, yet offers Miss Matty a home when she is in need.

Over the years the BBC has produced several series about Cranford, based on this and other Gaskell books: To many, Dame Judi Dench was the perfect Miss Matty. As Mary says in her parting lines, "We all love Miss Matty, and I somehow think we are all of us better when she is near us."

What listeners say about Cranford