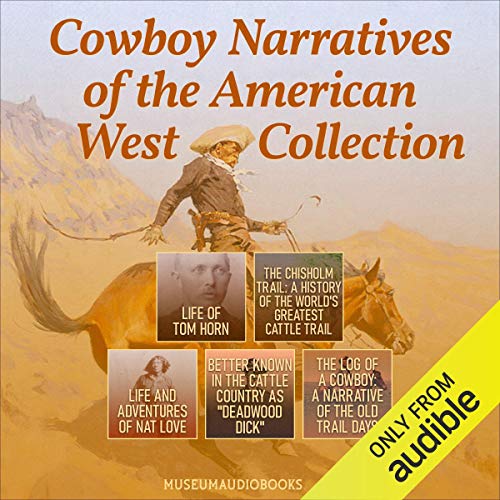 The cowboy is an iconic figure in American culture. With his hat, boots, and trusty horse, the cowboy rides in at a moment of crisis to intervene against the forces of evil. In the 20th century, the cowboy of the Wild West took center stage in the realm of popular literature.

Book one: Life of Tom Horn. Tom Horn was a range detective, a gunman, and a government scout and interpreter for Generals Wilcox, Crook, and Miles in the Apache wars. In this account of his life, he tells of the shocking events that led to his imprisonment for the murder a teenaged boy.

Book two: The Chisholm Trail: A History of the World's Greatest Cattle Trail. The Chisholm Trail was approximately 800 miles long, running from San Antonio, Texas, to the shipping pens at Abilene, Kansas. This trail was an important part of the old West and part of the lives of thousands of cowboys of the 19th and into the early 20th century. Millions of cattle and horses accompanied their drivers on the two- to three-month journey; its economic importance extended across the nation to the East as the livestock moved over this trail was headed to market to feed much of the United States. The author presents a history of the trail, telling the story of the drivers, who struggled with Indian ambushes, stampedes, and cattle rustlers. Some of the colorful characters associated with the trail include Charles Goodnight, Charles Siringo, and Joseph McCoy.

Book three: Life and Adventures of Nat Love, Better Known in the Cattle Country as "Deadwood Dick". Nat Love, the son of enslaved parents, was born in 1854 on a plantation in Davidson County, Tennessee. In February 1869, Love left Tennessee and found work as a cowboy, first in the Texas panhandle, then in Arizona. Love's story was published in 1907 and is considered the only full-length autobiography by an African American cowhand.

Book four: The Log of a Cowboy: A Narrative of the Old Trail Days. Andy Adams (1859-1935) was a writer of Western fiction born in Indiana. During the early 1880s he went to Texas, where he stayed for 10 years, spending most of that time driving cattle on the Western trails. The classic The Log of a Cowboy (1903) is an account of a five-month drive of 3,000 cattle from Brownsville, Texas, to Montana along the Great Western Cattle Trail. The book was Andy Adams' response to his irritation with the unrealistic cowboy fiction being published in the late 1800s. Widely considered to be the most authentic narrative of cowboy life, the book follows the 1882 moves of the young Tommy Moore, who is helping to drive the longhorns to Montana.

What listeners say about Cowboy Narratives of the American West Collection