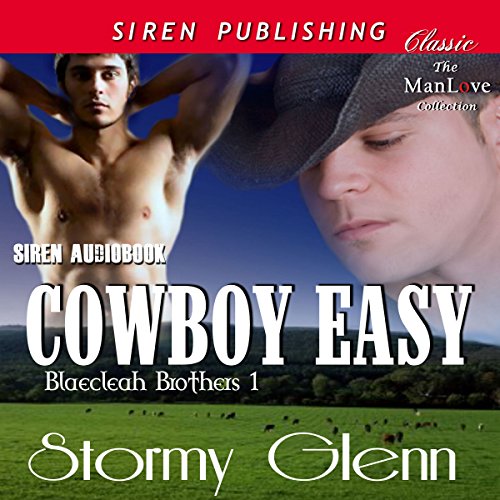 Lachlan Blaecleah never expected to find the love of his life in the middle of a street fight with two other men, but he knew the moment he saw Asa Miller that he wanted to get to know the man better. He jumps into the fight and becomes Asa's knight in slightly tarnished armor.

Asa Miller is amazed by Lachlan every time he looks at him. He's a walking, talking cowboy fantasy come to life, complete with hat and boots. After being rescued by him and taken home for a night of debauchery at the hands of the sexy cowboy, Asa isn't sure what to do next. Should he stick around and get to know Lachlan and his large family better or run from the feelings the man invokes in him?

Before Asa can make his choice, someone else steps in to separate the two men, on a more permanent basis. Asa has to decide if what they have together is worth the heartache he feels when he almost loses the man he loves. Or should he guard his heart and lose his cowboy forever?

What listeners say about Cowboy Easy

John Solo is one of my absolute favorite audiobook performers. Cowboy Easy is one of his earlier works and it was a great listen. It's a shortish story so it's definitely an insta-love one but I don't have a problem with those like some people do.

There's more than a bit of bullying in this story so if that bothers you, you might want to pass on this one. I loved how supportive Lachlan Blaecleah's family is of his relationship with Asa Miller.

I love these shorter audiobooks; they are perfect for when I'm performing mundane household tasks. This one certainly helped to pass the time in a very enjoyable way.

I was given a complimentary copy of this audiobook but that did not influence my review and no review was required in exchange for the gift.

This was a sweet cowboy story. I like that the characters are relatable and that the family is approving.

loved the story line. the characters were funny cute and sexy. ready to read the sequel

The performance from the narrator is also very important for me. I can't listen to a lot, because my English as a non-native-speaker isn't so perfect to follow a whole story over hours, when the narrator speaks too fast or too sloppy. Normally I have to SEE the person, who is talking to me in English. It took me a little bit, to come into the narrator, but at the end, it worked. I only have to take a few breaks between. I'm just not yet finish with the book, but I listen enough to give a review.

Super sweet, tons of sex, and a nice little story. Save it for when you need a pick-me-up. For a bonus, do the audio version. It's John Solo from six years ago and he sounds so earnest. It's thoroughly charming.

An oldie but goodie

John Solo is a guarantee for a fantastic audiobook experience. This sweet story is no exception to the rule. Absolutely loved it