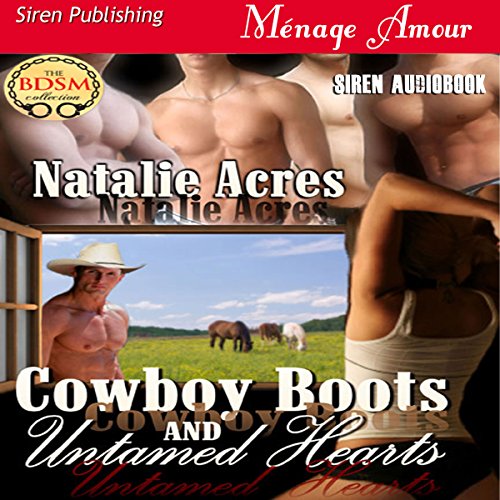 Sydney has a problem with Bitch. The horse her father treasures more than gold is running loose, and a blizzard is headed for Southwest Virginia. After spending the entire morning chasing the darn animal, she discovers she's probably not going to earn cowgirl of the year for her efforts. So what's a damsel in designer jeans to do? Call in reinforcements, and fortunately she knows where to find them. The Donovan men are known for their good looks, alpha-male ways, and skills behind stacks of hay bales. It's their skills that often keep Sydney up late at night, only she's just dreamed about them. She's never had the opportunity to act on them because her father's career often keeps her on the move. A blizzard strikes out, and the Donovan brothers want to take the first step and make Sydney their own. Only first they'll have to reveal a torrid past and answer some tough questions about their family and Sydney's father. Soon they discover their innocent little Sydney harbors several secrets of her own, and from out of nowhere a stranger rides in on the storm with a surprise for the Donovan brothers.

What listeners say about Cowboy Boots and Untamed Hearts

What could Natalie Acres have done to make this a more enjoyable book for you?

I think Natalie wrote great needs a new narrator. I will Never listen to Pepper again!

Who would you have cast as narrator instead of Pepper Laramie?

the storylien could have been interesting to finish

change narrators to have people enjoy the audio version

The slow movement of the story took effort in order to hang in there for the fun twists and turns that the story line took.

So much unfolded over a 24 hour period of time. The book covered the complete conversations that took place between Sidney and the brothers during this time. The reader was left unsure of what each player knew and what motivated them. This was both good and bad: bad in that I was confused at times but good in that there were moments of euphoria when realization came to light that the story was much more complicated and interesting.

Pepper Laramie's performance could have been better. Sidney's voice was not sexy nor fun to listen to at all. It made Sidney seem like a weaker character than Natalie Acres intended. More variation was needed between all the brother's voices so the reader can follow the story line a lot easier. This would also give the reader the same feeling that Sidney had during the story when she was blindfolded and hearing each brother talk to her.

I think this book would move much faster as a movie and be more in line with how a movie unfolded in that dialog is all that can be given (other than narration and memories) to explain the motivation and knowledge of each character.

While the sex scenes were quite steamy, I was left wanting much more from this large cast. The potential lays in the future story rather than where this story took me.