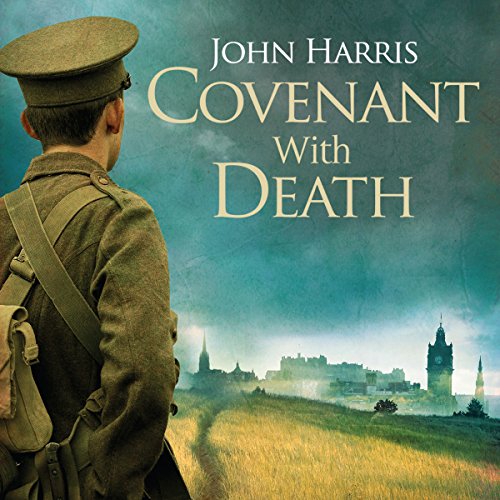 They joined for their country. They fought for each other.

When war breaks out in 1914, Mark Fenner and his Sheffield friends immediately flock to Kitchener's call. Amid waving flags and boozy celebration, the three men - Fen; his best friend, Locky; and self-assured Frank, rival for the woman Fen loves - enlist as volunteers to take on the Germans and win glory.

Through ramshackle training in sodden England and a stint in arid Egypt, rebellious but brave Fen proves himself to be a natural leader, only undermined by ongoing friction with Frank. Headed by terse, tough Sergeant Major Bold, this group of young men form steel-strong bonds, and yearn to face the great adventure of the Western Front.

Then, on one summer's day in 1916, Fen and his band of brothers are sent to the Somme, and this very ordinary hero discovers what it means to fight for your life.

Stirringly told from the down-to-earth view of everyday soldiers, Covenant with Death is acclaimed as one of the greatest novels about war ever written.

What listeners say about Covenant with Death

If you could sum up Covenant with Death in three words, what would they be?

The description of the attack that July 1 morning is so well written - Harris does a great job of describing the chaos of that terrible day.

Have you listened to any of Mike Rogers’s other performances before? How does this one compare?

My grandmother was born in Sheffield. I can remember my great grandmother and grandmother telling me stories of what happened to the City of Sheffield after the battle of the Somme in World War I. My maternal great uncle was a member of the Sheffield City Battalion (12th Battalion) York Regiment 94th Brigade, 31 Division and died at the Somme. I have his regimental patch with the white rose on it. I grabbed this book “Covenant with Death” by John Harris because it was a historical novel about the Sheffield City Battalion. The book was first published in 1961 and has been reprinted several times since then. The audio book I read was released on September 4, 2014.

The book is a novel about Mark Fenner, a reporter from the Sheffield newspaper, some of his friends from work and other men of the city of Sheffield. The first half of the book is about signing up with great glee and anticipation when War was declared in 1914. Then the waiting to be called, while life went on normally, at last call came, the training, and finally the issuing of summer uniforms and being sent to defend the Suez Canal. Finally they are sent to Senne, France in April 1916. The story continues with the daily routine of the men who by now we have gotten to know well. The last half of the book deals with the battle of the Somme. The book shows us with unbearable actuality what happened to the Sheffield City battalion on that horrible day. In the Somme offensive they were on the extreme left of the 15 mile British front. At 7:20 a.m. they moved into No Man’s Land at 7:30 a.m. bombardment stopped and four waves of the battalion rose and advanced into a devastating hail of machine gun and artillery fire. After 10 minutes all of the 1131 officers of men of the battalion were dead. In the story our hero Mark Fenner is the only one alive. But in the real battle only Corporal Outram, a Signaler was the only one left alive. This was repeated up and down the line and at the end of the ten minutes over 70,000 British was dead. This was the deadliest ten minutes in the history of the British Army; at the end of the battle one million men were dead. The battle of the Somme was the costliest battle in British history. The minute by minute description as told by Fenner is gripping. It puts you right into the battle with him. There is a big difference in reading a story from a personal viewpoint of the battle of the Somme than the history book description.

My great grandmother told me that most of the young men of Sheffield died in that battle and it took a long time for the city to recover. Every house was in mourning. The book gave us the contrast between the years of preparation and the moment of destruction of a single generation of a cities’ population on 1 July 1916. If you can picture this scene in many towns and cities throughout England and the British Empire with all their young men dead or wounded you will then understand why they changed the rules and never again allow regiments of men from the same city.

This is a great book that personalized the Great War. I am sure there are many people that would not be able to read this book. But if you are able, you will learn in great detail what it was like to be an ordinary soldier in the Great War. Mike Rogers did an excellent job narrating the book.

This novel is for all history enthusiasts. Although this book is a body of WWI historical fiction, it superbly describes the psychology of what it was like for all those who served in the British Army from beginning to the Battle of the Somme.

What a book! I wish I would have known the title years ago. Wow! Wowsa!

What made the experience of listening to Covenant with Death the most enjoyable?

The fact that although fiction it is based on truth. One can clearly picture the misguided enthusiasm of the Pals battalions as they rushed to their doom.

Without doubt the morning they went over the top.

The pre enlistment medical, when men lied about their age, their occupations and their health, simply to make sure that they got into the war.

Although written many years ago, it has lost none of its freshness. One to listen to again and again.

I first read this book over thirty years ago and still have a copy. Also have it on e-reader and now on this format.
For my money it is the best war novel ever written and I would love to see it as a TV series as well.

Would you consider the audio edition of Covenant with Death to be better than the print version?

So moving, so well read . I felt the soldiers initial gung ho spirit, I felt their final feelings of loss. Brilliantly written

Eff , if you've been in the forces you've known an Eff!

The first memoir I have read from ww1 and it. Makes you want to weep. 778 men reduced to 78 men and not one officer in 10 minutes. Well worth a listen.

Outstanding book with great narration. This book transports you into the story feeling great love for fantastic characters such as Eff and Lockie. Very well written and brings the sheer horror of the Somme into light. 10/10 would recommend

Covenant with Death is, in my opinion, one of the all-time classic War stories, up there with All Quiet on the Western Front in bringing the First World War down to a personal level. I have read John Harris' novel two or three times and this recording by Mike Rogers does it full justice.

Colleagues from a newspaper in a Yorkshire city (not named but clearly Sheffield) are imbued with patriotism at the outbreak of war. As they train, face the inevitability of fighting and then arrive, eventually, on the Western Front, the scales gradually clear from their eyes as they realise that the only way this war will be over by Christmas is for them personally, by bullet, shell or bayonet.

It is a story of comradeship, naivety, duty and, above all, courage. Two years in the making, ten minutes on the destroying. That was the history of the Pals Battalions on the first day on the Somme, encapsulated in this book. Mike Rogers' laconic delivery suits the character of the protagonist, Mark Fenner, to a tee.

It is an epic sorry with an emotionally charged finale. Listen and remember.

If you liked Birdsong, this is for you

Both well written and read, this book will never go out of date. In this centennial year it is a timely reminder of what we owe to the characters in this remarkable book. Definitely worth a read.

A brilliant and thought provoking story.

Would you consider the audio edition of Covenant with Death to be better than the print version?

Fenners realisation of Helens feelings for him.

I think sadness was my overiding feeling not joy.

Of men and heroes.

Where does Covenant with Death rank among all the audiobooks you’ve listened to so far?

This is the story of something unique - the 'Pals' battalions in the British Army in World War One. They were a completely new idea - a volunteer citizen army, not professional soldiers and not reservists. They learned to be soldiers completely from scratch. Morale, comradeship, courage were of the highest. Tragically, they didn't last long. Most went into battle on the 1st July, the first day of the battle of the Somme, what was called the 'Big Push'. Most never even fired a shot in anger. They were shredded on that first day. Literally shredded. This novel tells the story of one such 'Pals' battalion from one northern city. Only one professional soldier in the whole lot, a Regimental Sergeant Major from a Guards regiment plus one retired veteran, and they had the job of turning all these civilian men into soldiers.

It was intensely moving, funny in places, very realistic, you could almost imagine you were there. The author pulls no punches at all.

Have you listened to any of Mike Rogers’s other performances? How does this one compare?

I haven't, but I like his voice. Would be happy to hear another book read by him.

Right from the beginning the characters become like acquaintances. While the outcome is inevitable the story in compelling throughout and I commend the narrator who really made this book for me. I've just finished it and quite honestly still fell quite shocked and moved. Will certainly listen again and again. This is a book that was recommended by the late, great, Christopher Hitchens, as a must read. I wholeheartedly agree.