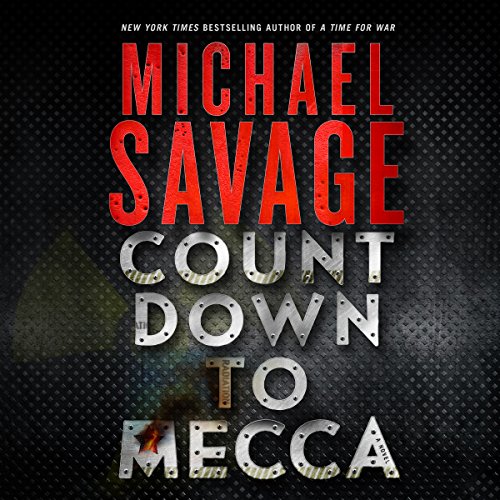 From The New York Times best-selling author of Abuse of Power and A Time for War and radio host of The Savage Nation comes a powerful thriller, Countdown to Mecca

A plane bound for Amman, Jordan goes down in the Caspian Sea. The crash yields no survivors - save the Russian mercenary who hijacked the flight - and a cask containing an agent of unprecedented destructive potential is missing from the wreckage. A carefully plotted terrorist attack has been put into motion, and the resulting chaos might be enough to push America toward another costly war.

The one man who might be able to stop the attack is Jack Hatfield, a freelance reporter who has never shied away from controversy. After making a politically incorrect statement about Islamic extremists, he has been discredited as a journalist and left to pick up the pieces of his career. But when his half-brother Sammy calls him, saying that his neighbor Ana overheard something she shouldn't have and now both their lives are in danger, Jack realizes he's stumbled upon a conspiracy to destroy Mecca. Now he, and a group of likeminded friends on the fringes of the law, must uncover who is behind the plot and stop them - or else witness the collapse of the world into a war of mutually assured global destruction.

Michael Savage's Countdown to Mecca is a gripping story that takes listeners on a journey where even the seemingly innocent aren't always innocent, the loyal aren't always loyal, and that even those counted on to serve their country, cannot always be counted on to protect it. With the threat of a third world war looming, Jack Hatfield must stop the destruction...before somebody can stop him.

What listeners say about Countdown to Mecca

Michael Savage has given us another thriller based on his Jack Hatfield character. The story is timely and believable and the pace of the action keeps the reader engaged. Michael's character development is excellent, making one feel like they could know several of them. Sprinkled with humor and grit, along with humanities best and worst qualities. There are also enough twists to keep the reader guessing. A worthy addition to the series!

This book was billed as a fast moving thriller by the author. Not so in my opinion.

Loved it! smart and gripping, with plenty of plot twists, Micheal Savage truly does have a fertile mind.

For years I have listened to Savage on the radio, my favorite radio episodes are the ones where he tells stories. When I found out that he wrote novels, I had to read/listen. He didn't disappoint me, as I knew he wouldn't.

Not a bad listen

Didn't manage to build the characters and their relationships as well as a Brad Thor, but still not a bad listen.

Not bad. Not great

Terrorist thriller with conservative political perspective. Not thrilling though not boring either. Trite in spots. Good beginning. As good as most "summer beach novels."