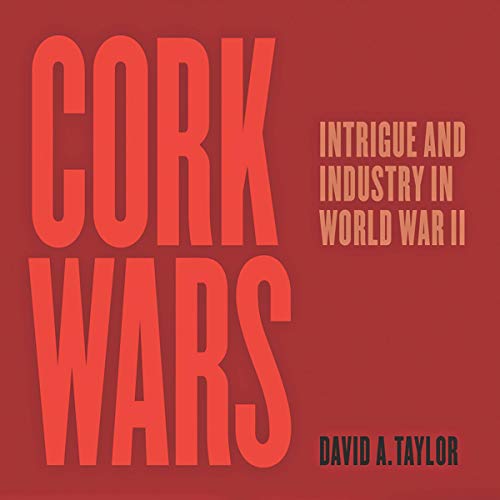 By: David A. Taylor
Narrated by: Robin J Sitten

In 1940, with German U-boats blockading all commerce across the Atlantic Ocean, a fireball at the Crown Cork and Seal factory lit the sky over Baltimore. The newspapers said you could see its glow as far north as Philadelphia and as far south as Annapolis. Rumors of Nazi sabotage led to an FBI investigation and pulled an entire industry into the machinery of national security as America stood on the brink of war.

In Cork Wars, David Taylor traces this fascinating story through the lives of three men and their families, who were all drawn into this dangerous intersection of enterprise and espionage.

At the heart of this tale is self-made mogul Charles McManus, son of Irish immigrants, who grew up on Baltimore’s rough streets. McManus ran Crown Cork and Seal, a company that manufactured everything from bottle caps to oil-tight gaskets for fighter planes.

Frank DiCara, as a young teenager growing up in Highlandtown, watched from his bedroom window as the fire blazed at the factory. Just a few years later, under pressure to support his family after the death of his father, DiCara quit school and got a job at Crown.

Finally, Melchor Marsa, Catalan by birth, managed Crown Cork and Seal’s plants in Spain and Portugal - and was perfectly placed to be recruited as a spy.

McManus, DiCara, and Marsa were connected by the unique properties of a seemingly innocuous substance. Cork, unrivaled as a sealant and insulator in defense equipment, was crucial to the war effort. From secret missions in North Africa to 4-H clubs growing seedlings in America to secret intelligence agents working undercover in the industry, this audiobook examines cork’s surprising wartime significance.

Taylor weaves this by turns beautiful, dark, and outrageous narrative with the drama of a thriller. From the factory floor to the corner office, Cork Wars is a bold and frightening tale of a forgotten episode of American history.

What listeners say about Cork Wars

This is a book about industrial espionage in 1940 America.

The book is well written and researched. Primarily, this is about the Crown Cork and Seal Company of Baltimore, Maryland. They make everything from bottle caps to oil tight gaskets for automobiles and airplanes. In 1940 the plant in Baltimore blew up. Why and how is the question.

The author tells of the investigation and how important the plant was to the war effort. The author almost writes this as a novel instead of a history book. If you are interested in industrial sabotage or the cork industry in the United States during World War II, this book is for you.

The book is seven hours and fifteen minutes. Robin J. Sitten does a good job narrating the book. Sitten has been narrating audiobooks for over twenty years.