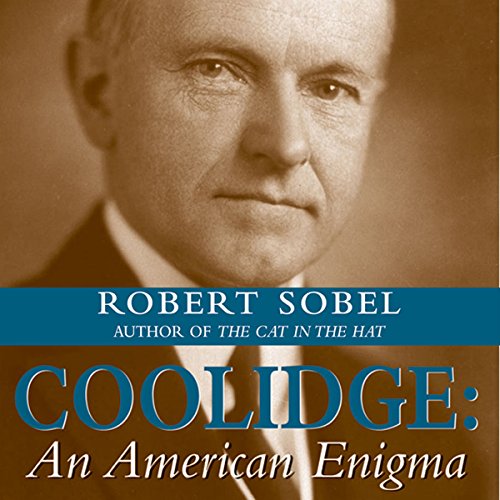 In the first full-scale biography of Calvin Coolidge in a generation, Robert Sobel shatters the caricature of our 30th president as a silent, do-nothing leader.

Sobel instead exposes the real Coolidge, whose legacy as the most Jeffersonian of all 20th-century presidents still reverberates today. Sobel delves into the record to show how Coolidge cut taxes four times, had a budget surplus every year in office, and cut the national debt by a third in a period of unprecedented economic growth.

Though his list of accomplishments is impressive, Calvin Coolidge was perhaps best known and most respected by his contemporaries for his character. Americans in the 1920s embraced Coolidge for his upstanding demeanor, which came as a breath of fresh air after the scandal-ridden administration of Warren G. Harding. The sleaze that characterizes much of American political life today was absent in the Coolidge administration.

"Sobel succeeds at getting the reader to take a serious look at this oft-neglected and sometimes disparaged president, and his tightly argued, well-researched book will be of importance to historians and presidential scholars for years to come." ( Library Journal)
"Sobel, who has previously written on the politics of economics, strives to provide a more balanced portrait of a surprisingly complicated and interesting man." ( Booklist)

What listeners say about Coolidge: An American Enigma

I thought I knew Cal but I did not, now I have a better understand. A cool guy. Good story well told. Enjoyable and informative

A sympathetic look at Silent Cal

What made the experience of listening to Coolidge: An American Enigma the most enjoyable?

This book attempts to flesh out the relatively one dimensional view of Calvin Coolidge which has been provided to most students of American history. It is generally successful in this regard, however the book relies too much on various verbatim readings of his speeches and writings. This gets a bit tiresome. Overall however the book does provide a better description of the personality and political philosophy of President Coolidge than found in other books on this era.

Obviously the personality of Coolidge dominates the book.

Would you listen to Coolidge: An American Enigma again? Why?

What other book might you compare Coolidge: An American Enigma to and why?

Any book about a historical figure whose accomplishments are overlooked.

Did Charles Bice do a good job differentiating all the characters? How?

Yes, Mr. Bice did an excellent job of separating and acknowledging pros and cons of decisions made by the characters in the book, as well as the reasoning behind those decisions.

I had not intended it to be completed in one sitting. I wanted to read it in segments and slowly consider what had been written, in order to get a better understanding of the man, and not overlook anything.

I'd recommend the book to anyone who cares to compare politics in Coolidges day to the over-reaching style of the current process.

I like the book but the reader could have been a whole lot more exciting. I found that I had to leave the story from time to time to get back into the storyt; but I did learn and I didn't realize he was a progressive liberal turned conservative. I wish other Presidents would read this book and take some lessons from him. Hell I wish everyone in Congress would read his book. I think I will ask my congressman to read his book.

A Book Exciting As It's Subject!!!

Ok... I wanted a biography of Coolidge which wasn't dragged through a left wing filter. This book isn't... It seemingly is without bias. It is also without original research, a fact the author makes clear up front. The author has no ability to fashion a well-turned phrase or to execute a slashing insight. Instead Robert Sobel through Charles Bice's yeoman's reading goes from point A to point Z, a ride much like one would take on an old-timey trolley car through the last century's first half. The rider peers outward as the book points out the sites (I believe you can hear Sousa if you listen reeeeeely closely :-) and there's little chance to get out and walk into the scenes at depth.

Still, I now know what I wanted to know about Coolidge. The book gave me what I needed to think about... Rather than giving me the writer's thoughts about it. Living in the Northampton, then Boston area for 25 years, my curiosity grew especially since the Western Mass region ignores its ex-President.

If you are interested in one of America's most popular Presidents and wonder why he's been essentially forgotten - you'll find this book satisfying if a tad boring.

A last thought... this is an old-fashioned history book. It is not driven to entertain, nor to indoctrinate. Rather it appears to be an orderly collection of facts which the reader can use appropriately. It will not spark a movie or TV show. I will allow you to fit Coolidge into your personal live-view. Today, that's a pretty high standard.

I found this to be a very interesting book about a relatively obscure president from the early 20th century. President Calvin Coolidge was very sucessful throughout his entire political career, including the presidency, and yet peculiarly he is largely forgotten. This book allows one to wonder if he should not be afforded the same consideration as say President Bill Clinton who also oversaw a very successful American economy during his tenure. Perhaps the opposite is true and President Clinton will join President Coolige and will end up largely forgotten by future historians.

If you could sum up Coolidge: An American Enigma in three words, what would they be?

What was one of the most memorable moments of Coolidge: An American Enigma?

His handling of various strikes during his time.

References to his integrity and unflappableness

Fascinating to not only learn about him but the era in which he lived.

An excellent and satisfying biography

An excellent and satisfying biography of one of the great, if underrated, US Presidents and the era in which he lived.