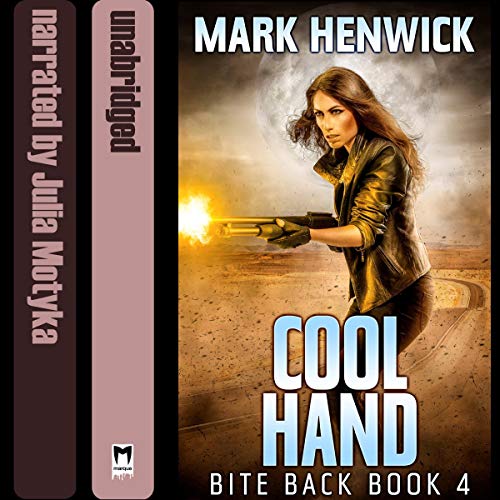 "If you don't believe your whole life has been a path leading to this one point, you're not focused enough."

The Athanate are on the brink of war.

Amber has to search for Diana in the forbidden zone of New Mexico, for the good of the paranormal world and her own sanity. Every step she takes is another opportunity to precipitate more conflict. Every easy choice is denied her and she must work without the support of the powerful paranormal factions in Colorado. When she most needs help, she has nothing.

But sometimes, nothing can be a real cool hand.

What listeners say about Cool Hand

love it can't wait for the next book

I have been a fan of marks since his first book and will remain one till the end. his books are fantastic, the only problem is that you have to wait for the next book.
Julia is the perfect narrator, listening to her is almost as good as reading the books. I own all the books and all the audible copies.
enjoy
Richard

Another great addition to the series

Another great addition to the series. Anxious for the next book. Then when it comes out I will get the joy of listening to the series again. Love it every time. One of the few series that I enjoy more than once. Plz plz plz check out this series. You won't be sorry.

That was pretty cold ending the book like that. You get the book so intense near the end then ease it down just a little and stop. What the heck so many questions. While i already had and was going to listen to the next book now I have to right now. I need to know. It's like i said in my review of the last book addictive.

What the main character goes through I am not sure anyone could really experience and come out the other side whole again. My self I would have broken and become a babbling idiot. On to next book.

COOL HAND IS THE BEST SO FAR

Amber's Crusis is getting worse so Amber goes after Diana . She ignores Narin and Felix to journey to New Mexico. THIS s a Great Performance by Ms Motyka.

Amber Farrell BK 4, She both Vampire and Werewolf!

What did you love best about Cool Hand?

Amber Farrell is a really cool character, both Vampire and Werewolf and Awesome, She is also head of her house, which somehow also means she has had sex with more than one person in the house, both a man and a woman, the best part was when she was explaining in a normal person why to her mother. It was hysterical. "Yes mom they know about each other, I love them both, I know you don't understand but..., etc, etc, And Amber isn't even the Cool Hand, Jennifer is. And she is human. And so very cool, Amber's old Army buddy sharp shoot cool right hand.

What other book might you compare Cool Hand to and why?

Maybe some early Anita Blake (Laurel K. Hamilton) Books before she went into writing Anita too sexy less plot, back at the beginning when Hamilton wrote Blake more plot, with some sexual tension. Maybe Carrie Vaughn's Kitty Novel in her later books after she married Ben, but Kitty just had one man but was very open to let the world pair as they will. But she was only a Werewolf and Blake a Human Servant to a Vampire, at the same time as being Queen of the Were-Leopards, And Person in charge of settling all fights among the Werewolves for its king, and Something over the Were-Tigers and Were-Lions, So it gets a little confusing unless you have read all 24 books. .

Which character – as performed by Julia Motyka – was your favorite?

It's a toss up, I thought Amber was cool with her instincts coming out all over the place and running thing almost more then logic. But they were good instincts. Her Wolf was good. And I liked that about her. And I loved the Cool Hands of Jennifer, always there by her side, but not too afraid to tell her when she was messing up either. She was just cool. And I forgot her name, (Oh the joys of MS) but the girl who force her to go shopping and into the expense Underwear Shop, wear they ran into her mother coming out of. She was so very funny too.

Part 4 of the Amber Farrell Series: Now Head of her own house, Amber, Have werewolf, have vampire, something not seen in 400 years, after thinking they had finally gotten the last Mutlog out of Denver she is faced with having to take one into her own house.

Not sure about the Mutlog word, couldn't remember what they called the bad guys. It began with an M anyway. I really enjoyed the book, and now I have gone back and bought the 2, and 3 ones, for some reason the 1st isn't on Audioble (Yet?) and hopeful the 5 will be soon if there is enough interest. The book really is good - on it's own so it makes want to know what happen before hand and after. It's like seeing only part 3 of star wars. Its good and you are really happy they blew up the death star, but don't want to know what lead up to that. Hence movies 1-3 that only the younger people have seen, and so on.