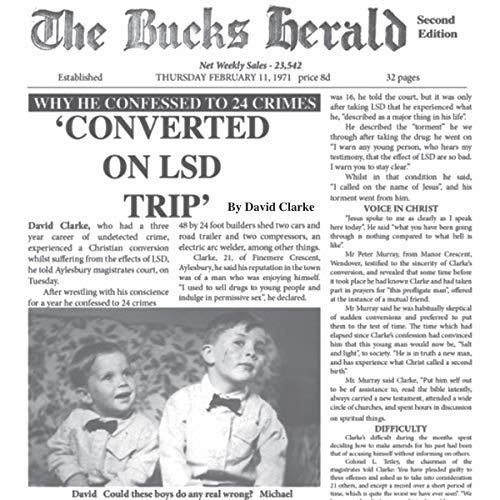 This audiobook tells the life of David Clark and that of his older brother, Michael, who were born in Oldham, Lancashire, in the 1940s. The family moved to Aylesbury and lived on the Bedgrove estate. Their formative teenage years were those in Aylesbury. Their parents sold their family village shop in Wilstone in 1962 to move to Aylesbury, but unfortunately, they became young criminals.

Michael was sent to Detention Centre, Borstal, and then Maidstone prison. David was sent to Dover Borstal at the age of 17. On David’s release from Dover Borstal in 1968, he spent his life dealing with drugs and crime until he had a sudden conversion from crime to Christianity. He turned his back on crime and learned to read to educate himself, which lead to him to making a confession to the police to 24 undetected crimes he had committed since leaving Dover Borstal in 1968.

After wrestling with his conscience for years, David made a confession to 24 crimes and gave information leading the recovery of more than 1,000 pounds worth of stolen property. In court, Colonel L. Tetley, the chairman of the magistrates, said to Clarke that his record over a short period of time was quite the worst they had ever seen and they had considered what they ought to do, and they had concluded his evident desire to become a martyr was one they were not going to gratify. He gave Clarke a conditional discharge for three years, pointing out that the sincerity of his conversion could be shown during that time.

David went on to higher education, graduated with a certificate in education awarded by Birmingham University, married, and moved to Bierton, where he became a Baptist minister at the Bierton Particular Baptist Church. He continued his work as a lecturer teaching electronics for more than 20 years in colleges of further and higher education.

Michael, unfortunately, continued his flamboyant life style, unaffected by David's change, and was arrested in the Philippines in 1995 and sent to prison for 16 years.

What listeners say about Converted on LSD Trip: Second Edition