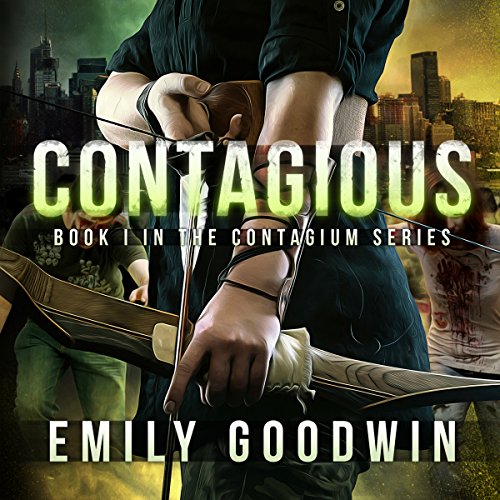 "I wasn't afraid of death. If I died, it would be over. My worst fear wasn't of dying, it was of living. Living, while everyone around me had their flesh savagely torn from their bodies to be shoved into the festering and ever-hungry mouths of zombies. It terrified me, right down to my very core, to be alive while the rest of the world was dead."

During the Second Great Depression, 24-year-old Orissa Penwell is forced to drop out of college when she is no longer able to pay for classes. Unable to find a job, she moves in with her aunt in Indianapolis. Down on her luck, Orissa doesn't think she can go any lower.

She couldn't be more wrong. A virus breaks out across the country, leaving the infected crazed, aggressive and very hungry.

Orissa is used to only being responsible for herself. When she finds herself a reluctant leader of a group of survivors, she must make a choice: set aside her issues and help the others or go off alone in search of her own family and friends.

I can't give this post-apocalyptic story six stars but I wish I could! (Tamara Rose Blodgett, USA Today and NY Times best-selling author)

What listeners say about Contagious

Great read but next book not up

I really liked this, I would have like it more if I hadn't realise 20 chapters in that despite the next book having been publish so time before it was not yet on audible. Yes I know I can get the ebook but I buy audio books because my boss lets me listen at work.

Love it! Can’t wait for the next one to be released. I’m obsessed! Can’t get enough of this storyline.

An enjoyable read that really leaves in suspense. I love the zombie apocalypse. I really enjoyed book 1 and I'm looking forward to book 2.

I enjoyed the story...

Just not the narrator. There were 2 character mistakes & struggles to stay in tune.

Not only is this book so poorly written it’s also poorly narrated. If Audible is going to charge 20.00 plus to listen to this horrid book they could at least hire a talented orator although in this case I’m not sure it would matter. I really want my money back.

I love this book not just for the storyline, but also the action, fright, excitement and even a little romance!! VERY DISAPPOINTED THAT BOOK 2 isn't out yet !! PLEASE HURRY EMILY!!! You can't leave me hanging like this!!
A+++

Slow start, but was captivated in the end!

I wasn't too sure about the book at first. It seemed kind of cheesy and they were a lot of holes in the story line. I was confused about the 'crazies' vs the 'zombies', but I'm so glad I stuck through it! About a quarter of the way through it started getting better and better. It's pretty convenient that the main character has martial arts training and a prepper grandfather. Sometimes I like it when they develop and become badasses throughout the book.

Some things kind of irritated me though. I think it's an obvious in the zom-poc you want to be as quiet as possible, and sometimes them making noise like they do doesn't make sense. Smashing glass when it isn't necessary and shooting their guns when they don't need to.

I also got really irritated when she did the typical 'guy tries to tell girl something romantic like and they get interrupted right before he says it' thing like TWENTY TIMES! I mean, I love a little cat and mouse for a while, but it started to get annoying.

Overall though it was a great book. They ending was such a cliffhanger and had me frantically searching the internet to see if the other books are out. Needless to say, I will be buying them and finding out what happens. I definitely recommend this book for the zom-poc/thriller lovers like me. Just stick through the first hour or so and you won't regret it!

As far as the narrator goes, she was okay, but one of the characters , Podrick, is supposed to have an irish accent and he didn't have one at all. It was kind of weird when they kept talking about his accent and the narrator didn't attempt it. Other than that, she wasn't too bad!!

was an ok listen

Kept me semi entertained. I've listen to better and I've listened to worse. Something stopped me from connecting with the lead character. She wasn't very likeable.