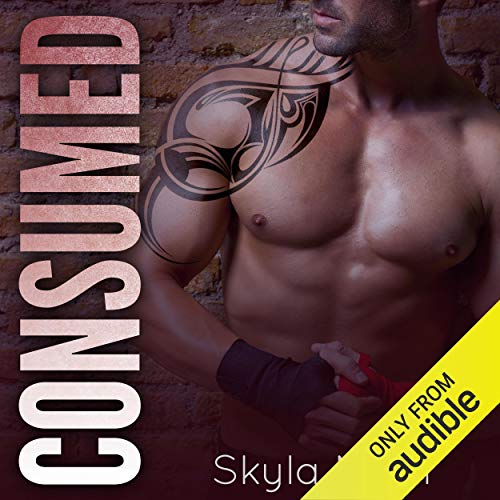 Olivia James has never been one to walk on the wild side, at least not until she meets Seth Marc - a cocky, sexy fighter at her father's gym.

He's infuriating, nauseatingly addictive and she just can't seem to shake him. He's only been in town a short while and his name is already on everyone's lips. He's the kind of guy moms' warn their daughters about - the kind that leaves a trail of shattered hearts behind him and he has Olivia in his sights.

Olivia has never met anyone as confusing as Seth and his hot and cold attitude constantly sends her reeling. She's never wanted anyone's touch so badly in her life, but having recently come out of a long term relationship diving into another is something she'd prefer to avoid.

Determined for his touch, but not to let him under her skin, Olivia embarks on the most thrilling ride of her life.

If you’re into books with steam, romance and bad boy MMA fighters… you’ll definitely like this one! The story begins with Olivia finally kicking her loser, cheating long time boyfriend to the curb. She decides to swear of men but it doesn't last long. She goes to her dad's gym and finds herself suddenly enthralled by a man oozing sex appeal. This man is a hot MMA fighter working his way towards becoming pro. They have insta attraction but Seth makes it known from the beginning that he doesn't do relationships. However, he is drawn to this sweet good girl and can't stay away. Seth is still hesitant to commit to Olivia but you watch his feelings gradually start changing. Seth & Olivia were super HOT together. I loved the sexy times and the fight scenes. Seth was definitely a swoon worthy bad boy turned one woman lovin’ sex god. You can't help but fall in love with him. I would have liked to learn more about his dark past. Perhaps that will be explored further in the sequel. All in all, I enjoyed Consumed. It was relatively low on the angst which was appreciated. Instead the focus was on Seth and Olivia's relationship growing into something beautiful in the midst of change, heart-ache and tragedy. This book is told completely from Olivia's POV with the exception of the Epilogue. I'm looking forward to the next book once Audible makes it available.

Wow... I was this close (snap finger) from stopping this book and calling it quits right around chapter 3... BUT I am so glad I didn't... This was an unexpected awesome book!

This story started out so teenager(y)... I wasn't sure if I got this from the romance section or not... but I have to admit, after O dumped her boyfriend Blade or Blake... (can't remember) and Seth makes an appearance...everywhere...the story really picks up...

There were some of the hottest smex scenes I have listen/read to in a long long while... The teasing on the couch; right before Seth's fight, and the BATHTUB!!! OMG!!! Gush, Gush....

This story changed pace so quickly, I almost had whiplash... Seth was soooo... intense from pushing O away, to literally consuming her life... I loved it...With his family drama, then OMG... the ending...(big o'l tear drop...drip...drip...drip) I just about died the last couple of chapters... I was shocked... and sad, then happy...then content... So many emotions...

Should have had a different narrator.

What did you love best about Consumed?

The story line was great. I am going to read now and I'm betting I will enjoy much better.

EM Eldridge, did not put her soul into this book. She did not keep my interest at all. She reads so fast it seamed like is was on high speed and very monatoned. No expression at all. I will not listen to another book she narrates.

I think we should be able to get a sample of the book just to hear the narrator.

Would you listen to Consumed again? Why?

I would love to listen to this book again. The story line was great. The characters were fun, interesting and sizzled! I loved the interaction between Olivia and Seth.

What was one of the most memorable moments of Consumed?

I loved the way that Seth's character slowly opened up to Olivia. The way that she was able to prove to him that he was a wonderful guy and truly gave more then he ever expected to get back.

Loved it! She made the characters come to life!

One of the best stories I have listened to

Would you listen to Consumed again? Why?

Definitely, it's always good for the nice girl to get the gorgeous alpha male MMA fighter!!!

Yes I did. It's worth the lost sleep

Girl has long term boyfriend who consistently cheated on her she finds a sexy MMA fighter for the rebound but it turns into love. Everywoman's dream!!!!!!!

The story was completely juvenile!!!

This book was so poorly written I couldn't believe it was not by a high school student with suffering grades in English and writing. Wow. What a waist of time! The conversations were juvenile and the story offered absolutely nothing. The romance was built almost immediately and was astoundingly underdeveloped. Story was so badly written that I neither saw the reason behind the draw and attraction between the characters nor why she had a calming effect on the hero. Then I guess as readers we have to assume it was completely based on looks. So if that is the reason, then the love that developed so quickly between a woman with extremely low self esteem and a guy responsible for so many female wet dreams was not a likely connection in real life and therefore nothing we can relate to. Overall if you purchase this book, you are wasting your credit completely. Save yourself the aggravation and move on to something better.

Would you try another book from Skyla Madi and/or Em Eldridge?

I thought the story was pretty good but very predictable so far.

Was Consumed worth the listening time?

I was hoping for a bit more from this book/author. The storyline was, thus far, very predictable. I am hoping that the final books are better and that if Em Eldridge narrates that she slows down a bit. The changes in voices for the varied characters were pretty good and she did the male voice better than most female narrators. That said, she sounded as if she was late for an appointment or afraid of loosing a bet for how quickly she could narrate this book. In the beginning her rushing/fast narrating made me anxious and I wanted to take a deep breath for her.

I hope the next books in this series are better, if Audible manages to offer them which is a 50/50 chance (Audible seems to neglect or ignore the fact that there are three books in a trilogy and several in a series) or just doesn't push the publishers to offer the last book in audio. I have become discouraged with Audible's lack of attention to this problem as there are several books that I have purchased that are part of a trilogy on the good faith that Audible will provide all of the books only to find that is not the case.

Would you try another book from Skyla Madi and/or Em Eldridge?

Probably not for a while. This writer seems like she's still getting her footing. Also, the book was supposed to take place in the U.S., yet the vernacular was wrong. We don't have lounge rooms, we have family or living room. We don't park our cars in car parks, but parking lots. What's more, the MMA fighter spoke like he was an English professor - might want to try using a contraction or two... The banter between the two girls was great, but really fell short on the male to female dialogue. My biggest complaint? There was very little character motivation where the fighter was concerned... Why would such a hot, aspiring, going pro fighter be with Olivia? Maybe I missed something.However, there were parts that were beautifully written and tender, which is why I gave her three stars. The story was okay, but could've been great - just missed the mark.

Would you recommend Consumed to your friends? Why or why not?

Unfortunately, I enjoyed the conversations between O and her best friend more than her dialogue with the fighter... In fact every time he spoke I cringed. It was just too unrealistic.

Was Consumed worth the listening time?

Wouldn't do it again.

Maybe this isn't this writers genre? Again, there were sections that were wonderfully written, but the whole point - the tension, romance and dialogue between the protagonist and the hero fell really short, in my humble opinion.

Where does Consumed rank among all the audiobooks you’ve listened to so far?

It was cute story, I keep listening to this book.

Have you listened to any of Em Eldridge’s other performances before? How does this one compare?

When Olie's father past away. It was so sad.

I was completely taken in by the story and very much enjoyed the narration. I found myself cleaning extra just so I could keep my ear buds in and finish the book.

Best thing was the end......Least - the annoying lead character Olivia! The kid who is easily manipulated into doing everything that she either doesn't want or doesn't want to wear! Who apologies to everyone as though it's her fault when she freaks when a woman rubs her tits on her and kisses her! Who worries about what they look like when they hear their dad died!

Something with strong woman character!

The narrator voice was good though sometimes a bit fast.

Do you think Consumed needs a follow-up book? Why or why not?

Definitely not I couldn't suffer any more about Olivia unless she became a stronger person who doesn't allow everyone to steamroll over her.