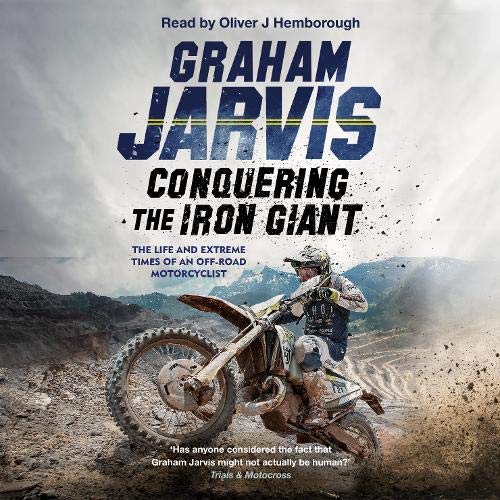 Graham Jarvis has been at the top of off-road motorcycling for the best part of 25 years and has competed in hundreds of competitions and races all over the world, from TV's Junior Kick Start in the early 1990s to the fabled and ridiculously perilous two-day Italian event Hell's Gate, which he has dominated in recent years and which is one of motorsport's most feared events.

Having excelled at trials and enduro, Graham moved into the high-octane world of extreme enduro, one of the most exhilarating sports on two wheels, in 2011. Since then, he has won extreme enduro's five major competitions - the Erzberg Rodeo, the Red Bull Sea to Sky, the Red Bull Romaniacs, the Tough One and the chilling Hell's Gate - no fewer than 25 times, making him one of motorsport's most successful riders.

In Conquering the Iron Giant, Graham will take us from his early years in Canterbury, where he started out on an old BMX bike that his dad had rescued from the tip, to competing against up to 1,800 riders in races where dozens are often airlifted to hospital, and only three or four finish...with Graham usually at the head of the field. It is a story of dedication, skill and, above all, an extreme passion for off-road motorcycling.

What listeners say about Conquering the Iron Giant

The making of a legend is seriously motivational

If you like bikes, especially trials, enduro or hard enduro then this is a book to pick up. The making of a legend is never as smooth as you think and man this book gave me a kick of motivation to remember that anything worth having is worth fighting for, chase your dreams and don't lose faith! Awesome read, especially when you realise quite what it takes to become a hard enduro legend. Some of my favourite bits (I promise no spoilers): - kid Jarvis being caught by the police in his local wood but being let off as the policeman was so impressed - being distracted by the sight of so many topless women on a training trip to France - The vivid rivalry with Dougie Lampkin and how they actually both used the competition with each other to better their riding 👊🏼 - A resident van ant nest and feeding it jam... - Picturing Graham in a one piece lycra trials suit - And finally the awesome attitude towards an injury that took Graham off the bike for 6 months giving the opportunity to strengthen his mental state ready to come back stronger than ever (I can seriously relate to this following my accident)

A great honest account of what it takes to be No1 loved it. worth a read or listen to the audio book

What a fascinating insight into the off road motorbike world and the life of Graham. I didn't know what to expect from a book by the quiet and unassuming Graham but this book doesn't disappoint...it is funny with laugh out loud moments, honest, heartfelt and punctuated with some amazing and surprising stories. A must read for anybody interested in off road motorbikes, hard enduro or a fan of Graham Jarvis. I cannot recommend this book enough....truly fabulous!