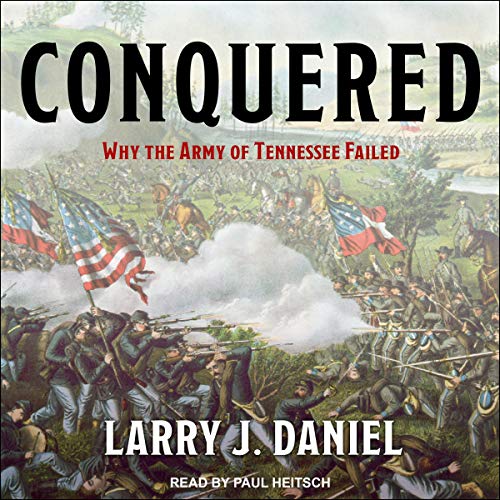 Operating in the vast and varied trans-Appalachian west, the Army of Tennessee was crucially important to the military fate of the Confederacy. But under the principal leadership of generals such as Braxton Bragg, Joseph E. Johnston, and John Bell Hood, it won few major battles, and many regard its inability to halt steady Union advances into the Confederate heartland as a matter of failed leadership. Here, esteemed military historian Larry J. Daniel offers a far richer interpretation. Surpassing previous work that has focused on questions of command structure and the force's fate on the fields of battle, Daniel provides the clearest view to date of the army's inner workings, from top-level command and unit cohesion to the varied experiences of common soldiers and their connections to the home front. Drawing from his mastery of the relevant sources, Daniel's book is a thought-provoking reassessment of an army's fate, with important implications for Civil War history and military history writ large.

What listeners say about Conquered

This is one of the best books I’ve ever read about the inner workings of the Civil War.

This book is one of the best Civil War books I’ve ever read.

The book was absolutely intriguing.

Again, a fairly well- written and thoughtful account made almost intolerable by the narrator.

When are these people going to learn that trying to perform rather than simply telling the story detracts rather than adds to the experience?

And mispronunciations, venal sins in the case of place names (Trousdale and Maury Counties in TN, Versailles, KY), mortal in the case of the surname of the great Patrick Cleburne. Unbelievable.

Overall this is a well researched book I don’t under researched area of the Civil War. The narrator however makes it almost unenjoyable. He sounds like a robot and the miss pronunciation of important names is cringe worthy i.e. “Clayborn” for Patrick Cleburn. Further the narrator attempts to insert emotion but does so it such inopportune times it’s hard to believe he is actually human. He seems to have an anti-South bias based upon win his narration is emotive. Listen to a sample before you purchase.

Excellent thematic overview of the Army of Tenn.

While not setting out to break new ground, the work describes the many reasons for the downfall of the Army of Tennessee. I found the writing and narration clear and engaging.