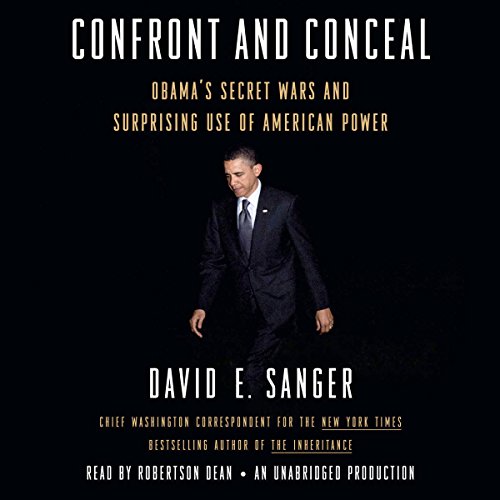 From inside Obama's situation room…

…the critical moments in the covert war against Iran, the struggles to deal with a recalcitrant Pakistan and its fast-growing nuclear arsenal, the tensions with the American military over Afghanistan and with allies swept up in the chaos of the Arab Spring.

Three and a half years ago, David Sanger's book The Inheritance: The World Obama Confronts and the Challenges to American Power described how a new American president came to office with the world on fire. Now, just as the 2012 presidential election battle begins, Sanger follows up with an eye-opening, news-packed account of how Obama has dealt with those challenges, relying on innovative weapons and reconfigured tools of American power to try to manage a series of new threats. Sanger describes how Obama’s early idealism about fighting “a war of necessity” in Afghanistan quickly turned to fatigue and frustration, how the early hopes that the Arab Spring would bring about a democratic awakening slipped away, and how an effort to re-establish American power in the Pacific set the stage for a new era of tensions with the world’s great rising power, China.

As the world seeks to understand the contours of the Obama Doctrine, Confront and Conceal is a fascinating, unflinching account of these complex years, in which the president and his administration have found themselves struggling to stay ahead in a world where power is diffuse and America's ability to exert control grows ever more elusive.

Scary but revealing and informative

This was a very engaging book. I knew many of the broad strokes of topics covered by the books just from following the news, but the in-depth examination of Obama' responses to various events was incredibly interesting. I was struck by 1) how scary many of the questions are that the president has to make essentially unanswerable answers to (what do we do if terrorists actually just got their hands on a nuclear weapon?) and 2) how, after reading this, I had much more respect for the decisions Obama had made.

Put yourself in the shoes of the President

This was an informative book that takes you behind the scenes of the presidency in its most difficult and sometimes scary role of commander in chief. This peak behind the curtain was incredible and I am greatly appreciative to the author for reporting on the leaders of our country as they took on the momentous events covered in the book.

I felt I got to know the people behind the decisions and the differing views each of these situations involved. For example, the Bin Laden raid could have been a bomb, or could have included Pakistani buy in. Why did we choose a raid that could have ended like Black Hawk Down and to what extent did we feel confident that Bin Laden was even there? These were just a few of the issues discussed and I was absolutely enthralled with the way the story was told.

In this book you get in-depth context and the “why” behind some of the directions we’ve gone and I can’t recommend it more.

Where does Confront and Conceal rank among all the audiobooks you’ve listened to so far?

Probably in the top three books that I've listened to so far.

What was one of the most memorable moments of Confront and Conceal?

This book is so packed with revealing insights from so many Washington and military insiders that no one moment can be singled out.

What does Robertson Dean bring to the story that you wouldn’t experience if you just read the book?

So many different inflections that really give you a sense of the characteristics and intensity of the various contributors to this dialogue.

Surprise. I was surprised at the strength and tenacity of President Obama. Certainly a very shrewd leader and far stronger than the media and the "right" give him credit for.

David Sanger does a fantastic job of fairly and impartially reporting the facts that he gathered for this book (except for his position on the Drone strategy). There are times when you will strongly agree with positions and times when you will get a bit ruffled . . .but that's what happens when both sides are told fairly and accurately. GREAT BOOK!

What was one of the most memorable moments of Confront and Conceal?

Those about American cyberattacks on Iranian enrichment facilities

Sobering reminder on what the presidency requires

Would you listen to Confront and Conceal again? Why?

I would. Having read "Wired for War" by Peter Singer, I was curious as to how Sanger was viewing President Obama's policies on the use of drones - and other high-tech warfare. POTUS has to be smart enough to understand how 21st century technology is changing what it means to be at war. My first go-round I would say Sanger is as conflicted as I, but some of the reviews I read say Sanger feels Obama has too much power and is using it improperly. Either I missed something or the reviewers are using their own spin.

Surprisingly FAIR. And LOTS of inside tidbits.

Would you listen to Confront and Conceal again? Why?

Sanger is a NYT columnist but left his lefty credentials (mostly) at the door with this book. Quite apart from the excellent narration and gifted story-telling of the author, the book is a very fair, comprehensive assessment of Obama foreign policy. Which is to say, it tells, in the most gentle way possible, how ruinous it was. And amateur. And cowardly. He lays out the almost incomprehensible idiocy of it with the most gentle strokes. I am a never-Trump conservative and even I enjoyed it, and highly recommend it. Well done, Mr. Sanger.

This book systematically reviews Obama’s foreign policy. The author is an impressive journalist; and the quality of the research is excellent; WikiLeaks is uses somewhat heavy in combination with many other protected sources. Perhaps books are the new outlet for serious journalism.

The book somewhat strongly refutes the idea that Obama’s foreign policy is wimpy. For me it also reinforced the idea that his administration is more amateurish than professional. Finally, it somewhat strongly argued that Obama’s administration has learned on the job far better than most and has adapted somewhat aggressively, once it finally figures things out.

As a disenfranchised republican I was compelled to vote for Hillary. I tended to view Obama as a Jimmy Carter like character (i.e., well-meaning but perhaps in over his head). In some regards this book reinforced these pre-existing beliefs. The surprising thing, however, is that the book convinced me that Obama somewhat consistently gets to a good outcome in the end, after first pushing several bad strategies. For me this was a new insight.

It is said that Obama is an advocate of Lincoln’s idea of a Team of Rivals (see book by that name). If true this book reveals the strengths and weaknesses of this approach. First of all, the team of rivals approach requires a very powerful leader (and Obama is no Lincoln). Secondly it’s a pretty ugly process (even Lincoln’s presidency reveals that). But in the end this approach maybe more robust than it appears, i.e., eventually getting to a good outcome most of the time.

The good: It was a good story, an interesting review of the issues both a President and our nation faves in the changing world around us. It concedes idealism and the “right thing” is at odds with our own interests and the careful and often painful choices a President must make.
The bad: Biased on the “greatness of Obama”, with snarky remarks about previous administrations and the usual diatribe that Obama inherited a mess (as if each President hasn’t). I’m tired if this line. Obama did some good and some bad. Welcome to the club- you did an average job and kicked the can down the road a bit.

That said- worth a read. Well thought out, interesting writing. Good descriptions and insight.

An interesting story told at a dull pace

The topics were quite interesting, but the book doesn't finish as strongly as it starts. The Stuxnet/Olympic games part at the start of the book is by far the best part and the story doesn't really conclude, I guess because Obama's second term hadn't started at the time of writing.

I had to set the narration speed to x1.1 to stop the author from putting me to sleep. Fine voice but such a slow reading speed...

They Would have Impeached Bush for This

Sanger has his sources and does an excellent job of uncovering the motivations and personal histories that set the stage for the administration's decisions over the last few years. Much more compelling than his preceding book The Inheritance. A great first pass at the Obama administration's foreign policy.

This book was an excellent study on the job of the President of the United States. True and frank..; it lets the reader really know what he has to deal with day by day, and how he handles the most difficult decisions