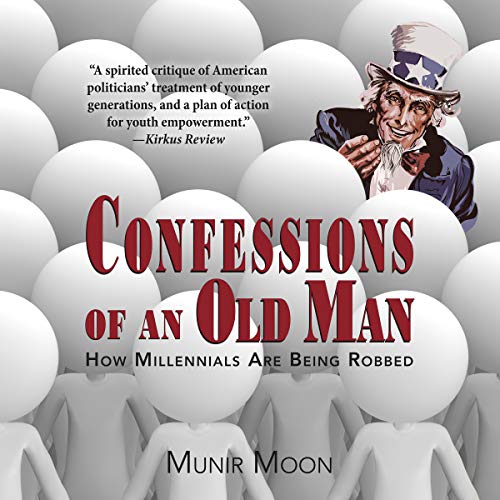 Confessions of an Old Man

Confessions of an Old Man is about how the next generation is being robbed of its future and what members of the generation can do about it. The goal of the audiobook is to get millennials angry enough to actively engage with the American political system and take control of their destiny instead of their future being decided by rich old white men. It is a statement of collective guilt that places the responsibility on my generation, the Baby Boomers, for dealing a bad card to their children and grandchildren. My generation controls the Congress, the Supreme Court, and the presidency, so we cannot shirk from the responsibility.

This is a call to action for the MI generation - which has the most to lose if the US continues with its current domestic and foreign policies. It is also a call to those parents and grandparents who want to leave a better world for their children and grandchildren.

Millennials and the iGeneration combined are called the MI generation in this audiobook. They are defined as those who were born between 1980 and 2018 and represent about 150 million Americans. The election of 2020 will be the most consequential election of this generation. Through their votes, they can transform American laws and policies by engaging in the political process and public deliberations. The only thing the MI generation needs to do is vote, which is free, and remove career politicians who have been in Congress for too long and are part of the problem.

There is a silver lining, and it lies with the MI generation. Instead of getting depressed, they can start changing the face of Congress, where the mess is being created. Congress has the power to make laws and write checks. It is Congress that passed laws incentivizing large corporations to export American jobs, piling debt on the MI generation, taxing working income at a higher rate than nonworking income, charging higher interest rates on student loans, and prohibiting Medicare to negotiate drug prices.

What listeners say about Confessions of an Old Man