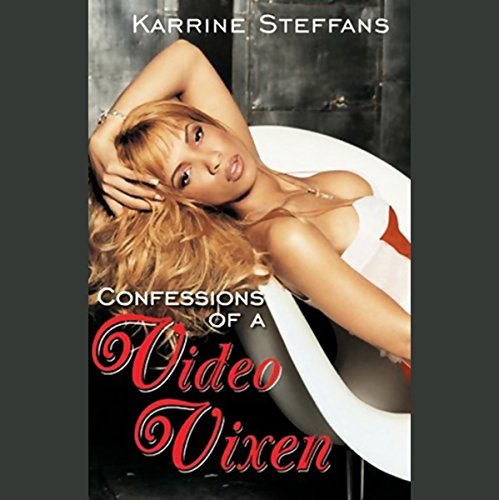 Confessions of a Video Vixen

Confessions of a Video Vixen is the widely anticipated memoir of Karrine Steffans, the once-sought-after sexy siren who appeared in the music videos of multi-platinum hip hop artists such as Jay-Z, R. Kelly, and LL Cool J. A top-paid video dancer, Karrine transitioned to film when acclaimed director F. Gary Gray picked her to costar in his film A Man Apart, starring Vin Diesel. But the movie and music video sets, swanky Miami and New York restaurants, and trysts with the celebrities featured in the pages of People and In Touch magazines only skim the surface of Karrine's life.

This memoir, part tell-all, part cautionary tale, shows how Karrine came to be the confidante of so many, why she kept their secrets, and how she found herself in Hollywood after a life marked by physical abuse, rape, and drugs, all before she was 26. By sharing her emotionally charged story, she hopes to shed light on an otherwise romanticized industry.

What listeners say about Confessions of a Video Vixen

Such a eye opening story that has you sitting on the edge of your seat the whole time. Karrine is the author and narrator which has its pros and cons. Although her first hand account is riverting, pronunciation/accent is a massive down fall and very prominent. In saying that, I will definitely be buying the next book, as the story wins over any negatives the narration may have.

It ishard to stop listening to this one

This audiobook is not just about who she slept with and isn't a tell all to expose everyone she has been with. I was surprised that this audiobook had me listening for nearly 6 hours straight with hardly no breaks. She tells her story well, and what a good story it is. I don't want to give away a thing, but you have to check it out yourself. By the time you finish, you are going to hate her mother, Some guy named Rodney and Kool G Rap for the pain they put this woman through. Check it out, I don't think you'll be dissapointed. I felt the need to actually review this one because it was that good.

Funny for all the wrong reasons.

What would have made Confessions of a Video Vixen better?

If the author had gone through therapy before writing both of her books, it would have made an incredible difference - how many times can you count the solid declarations that she makes about her relationship with Bill Maher...only to completely reverse her opinion on the relationship again and again? I found way too many instances in which she was an absolute hypocrite in her personal relationships while preaching the necessity and value of morality in her new life as a successful author.

Would you ever listen to anything by Karrine Steffans again?

I have - I listened to "Confessions of a Video Vixen" and it blew me away for all the wrong reasons. I could not believe Steffans' reasoning for intentionally becoming pregnant by her allegedly violent boyfriend because she believed that the baby would provide her with the strength to leave. Instead, that poor child was treated as a sponge to soak up the violent family dynamic and Steffans' admitted repeated abandonment of her own son.

Time and time again she proves that she is an incredibly smart woman that could have been successful in any job that she set her focus on despite her painful childhood. Becoming addicted to a lifestyle that she couldn't afford then complaining that the men that she prostituted herself to should have given her extra money when she needed it was absurd. She knew that the crowd she ran with were only there to use her as a party girl/professional mistress, yet is stunned when it happens to her.

Steffans was a fantastic narrator - her performance is thoroughly engaging...almost as much as her convoluted logic behind the abandonment of her son and making the responsibility of her financial downfall be rectified by the shady characters that she chose to become intimately involved with.

All three. I'm glad that she has become a successful author, but I wish I could dispatch a therapist immediately to help her deal with her own admitted lies and manipulations she employed to get what she wanted. The people that she actively sought out to indulge in a dangerous life were cold and calculating men that repeatedly showed their true nature to her, a fact of which she admitted herself. She became one of them as well, but still blames them for the choices she willingly made at the expense of her own son.

I find it fascinating and have listened to both of her audiobooks many times since purchasing it because to me it is a captivating memoir of a beautiful but mentally ill and toxic person that repeatedly ruins her own success and relationships. Both books are psychological profiles to me instead of memoirs.

It’s was sad and crazy at the same time. But understand why she is the way she is

I liked that the author herself narrated this book. At least she got the phrasing right, UNLIKE some more serious books where the narrator is a drone!!! Also, when she imitated the voices of the male rappers in the story, she got it 100 percent right and I felt like I was right there in the room or the bar. This book is worth listening to for (admittedly) the juicy details but it is a major plus that the author is the narrator. I can just hear some stiff "professionnal" person trying to get the inflection right on Kool G. Rap's "B*** I'ont CARE" or Ja Rule's "Come here crazy girl!" or the Limp Bizkit guy's "Don't you know who I am?" One thing that would make this audiobook better is if it had some of the songs along with. I don't know much about hip-hop but I know the universal story of women looking for love in all the wrong places. I wish she had had more of a section on how not to go down the same road. My very favorite scene is when she snapped due to jealousy in the bar. She describes the feeling of jealousy and doing a slow burn and the way she read it .... "and SNAPPED" No other narrator could deliver this line so deliciously. Worth listening to for just that!

Negative stars would still be too generous

I should have known from early on with lines such as “he was short and dark, just like the drink he held..” this is probably the worst book I’ve ever listened to. How I WISH I could get these six hours back.
Ms Steffans takes the oldest profession in the world and tries to somehow sell it to the readers as something new. She claims it’s a “cautionary tale” but reading this garbage it felt more as if she was bragging. Stating that each of her high profile encounters claimed her to be their favorite, yet when she begged for help, not one came to her rescue.
She’s never worked a day in her life, relying on sex to pay her hotel bills, often leaving her son for months at a time. I feel so sorry for her son, for someday he’ll read about his selfish, incredibly ignorant mother.
This book is a chronological mess, jumping back in forth in time, first she’s 24 then in the next breath she is “servicing” Usher when she’s 21.
Stick to stripping, Ms Steffans. Trying your hand at being an author is embarrassing.

A lustrous feminine voice whispers a modern tale of the old but forgotten ego disguised as addiction to sex, drugs, acceptance.

And why is she proud of this?

First of all, I feel terrible that she put this out there when she has a child in this world. She's disgusting!

This is the first audiobook I have ever listened to and I have not attempted to read a book in several years. I found this book to be very interesting and exciting. In fact I Iistened to the entire story in one sitting, as the almost 6 hours past I could not believe it was almost dawn as the story completed. I was able to imagine just about every scene as it occurred. Identifying with the individuals Karrine spoke of made the story that much more intreging. Hearing this story has made me very eager to purchased more audiobooks...so eager that I joined audible.com as a premier member. I have nothing to compare this story to, as I am a first time listener, but I find it to be excellent, detailed, and in awe that someone could have such a extreme life. I was additionally impressed that the narrator is Karrine herself! I am recommending this audiobook to all adults especially those interested in the "celebrity life". I gave it a well deserved 5 stars!

Oh dear God, to have back the hours...

What would have made Confessions of a Video Vixen better?

What was most disappointing about Karrine Steffans’s story?

Her writing. Maybe after a few more writting classes, we could get a better story.

By reading it. I think if she has chosen a narrator other than herself, that would be the ticket

I thought this book was going to be really good but boy I was wrong. At first it was interesting as she told how she was raised and about her life as a teen into adulthood. I felt sorry that she was raised so badly and all she endured. The crappy stripper music between chapters is super annoying and makes no sense! The book then turned into her boasting about being a whore basically. Name dropping people in the rap industry she slept with even knowing they had spouses etc. This book is trash straight up.

okay Terrible & pointless story telling that is soooo poorly narrated. Im glad things progressed for her but man, that was hard work. x

A captivating story well narrated bringing to life the fast life of hip hop.
A note to audible: please ensure that the audio book chapters syncs up with the chapters of the book.

trashhh nothing of a confession. A 5 chapter bore. skipped through deleted in end. yawns!

great story i have a feeling that she left out huge chunk and she tried to portray herself in a more positive light but still a great read.