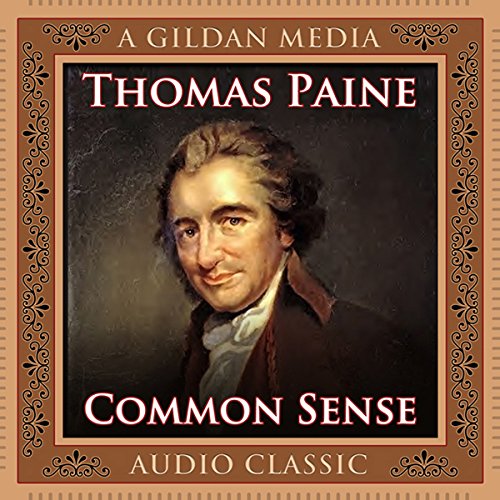 Thomas Paine published Common Sense in 1776, a time when America was a hotbed of revolution. The pamphlet, which called for America's political freedom, sold more than 150,000 copies in three months. Paine not only spurred his fellow Americans to action but soon came to symbolize the spirit of the Revolution itself. His persuasive pieces, written so elegantly, spoke to the hearts and minds of all those fighting for freedom from England.

“No writer has exceeded Paine in ease and familiarity of style; in perspicuity of expression, happiness of elucidation, and in simple unassuming language.” (Thomas Jefferson)

What listeners say about Common Sense

What made the experience of listening to Common Sense the most enjoyable?

It surprised me that I didn't have much trouble following the narrative even though it's in 1700s English and I'm not a native speaker.

Paine's use of religious references to underline some of his point. Surprisingly many.

Thomas Paines Common Sense was important at the time he penned it, but today has no real meaning, as he could never have imagined the United States Government today, as it is all consuming, reaching into and intruding into our personal lives, as far as our bedroom. Police powers are approaching brown shirt levels of 1933s breaking glass night, as probable cause has reached what that officer thinks it means on any given night. Todays comedy with the ChinaVirus shows you a government that would pale a thousand George the Thirds, and it is quite clear that a second revolution is simmering, to where the President can now ruin a million families lives under the guise of we are doing it for your own good, and a dumbed down populace accepts it willingly, but will they?
Our homes, our bank accounts, and our family are expendable for this ruse of a flu, and skewered daily statistics. Common Sense, I say not, and Thomas Paine would leave this country today to live in 17th Century England. I pray Americans will dethrone King Trump and we cannot forget our unalienable rights that have been stripped of us, but 1200 dollars will save your house and family.
Common Sense shows you what freedom is and was, and today it is null and void. I cannot even recommend this book unless you want to understand what freedom actually once meant to the colonists. They were ready to defy the most powerful of Kings, and the question on the table is...Are We?

I've listened to it many times now and have marveled at the bravery and foresight of Thomas Paine. It is also well narrated and gives you the feel of a colonial era debate tournament.

A MUST READ for every American!

Enormously popular and widely read propaganda pamphlet, published in 1776, clearly and persuasively argues for American separation from Great Britain and paves the way for the Declaration of Independence. Eloquent, persuasive and incendiary. I can see why this pamphlet was so influential. A must read for every American!

narration was not the worst but not the greatest.

the narrator nearly put me to sleep despite the fact that i was very interested in the information being provided.

Brilliant, and even more needed today than in 1776. Should be required reading for every school child, teacher, and elected official. Eventually, even journalists should read it, or at least have someone read it to them.

Revisit (or Visit) History and Open Your Eyes

This was surprisingly easy to "read," and very interesting from this side of history. Hard to imagine even the need for this, but definite reminder of why America needed to do as she did. Glad I took the time. Do you know what Paine argued made sense for the colonists, what the argument was really about? Listen and find out.

Thomas Paine was 39 years old when he wrote the pamphlet that quickly sold 500,000 copies and led to the Declaration of Independence. His reasoning -common sense- is based on his understanding of biblical truth, and there was no question that America should be founded on principles of religious freedom and freedom of speech. Paine argued that reasonable citizens’ representatives, under God, would be able to come together and make wise decisions for the good of all. Paine’s words have come painfully true. Leave out “under God” and there is no way to know truth or to agree on anything.
I’m glad I took time to re-visit this gem.

A must read for ALL AMERICA'S.

Oh how America has lost it's way. Thomas lays out clearly the down fall of kings and dishonest government. Thomas breaks down the way government was intended to be when breaking away from Britain. If WE the people were educated properly things would be much different today. Things will change by congressional law, militarily, or by MOB.

You know a book is really good when people are still talking about it almost two and a half centuries later. Thomas Paine wrote and published "Common Sense" (January 9 or 10, 1776), demanding independence from Great Britain.

Paine published anonymously out of necessity. What he wrote was treason, and what he advocated then might be called terrorism today. If the colonists had lost, the Revolutionary War would have been consigned to the ignominy of an armed insurrection.

"Common Sense" was actually one of the first audio books. General George Washington had it read to the troops of his Continental Army, and inspired Americans read it to their illiterate neighbors. It's fun to imagine colonists meeting in secret to discuss the radical ideas that became the Declaration of Independence and eventually, the Constitution.

Walter Dixon's narration wasn't particularly inspired, so I'm not giving the narration high marks. But as for the book - the cornerstone of American democracy deserves a 5.