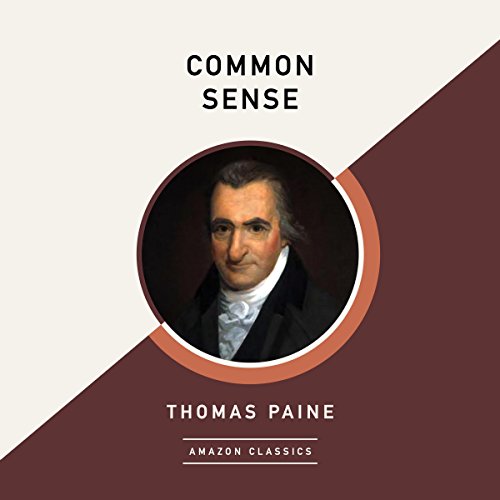 An immediate sensation across the thirteen colonies, Common Sense extolled Paine's belief that government should be simple and represent the will of the people, acting not as an oppressor but as a body to protect society. His clear and persuasive argument appealed to the common people, impressing on them the importance of secession from Great Britain. Six months after Common Sense was published, independence was declared, and the American Revolution was born.

AmazonClassics brings you timeless works from the masters of storytelling. Ideal for anyone who wants to read a great work for the first time or rediscover an old favorite, these new editions open the door to literature's most unforgettable characters and beloved worlds.

The content of the book is good. However, this takes a book written in older English and adds an accent to it. I like to turn on audible and work, and I find my self having to pay particular attention just to understand the words being spoken. Not enjoyable to me.

At a time when people were divided as to the direction of its land, people and country. Mr. Payne called for the citizens of the land and all neighbors to put selfish ambition aside for the nation to come together.

It is sad to think as part of the founding of the United States of America, he (along with the other founders) are written off as priveliged. the founders had far more to give up than our current generations.

Mr. Payne was a concise individual, basing his conclusions on how an independent nation state would survive from its own resources. Relying on no other nation and looking forward in hope.

I had not read "Common Sense", but knew of its existence since middle school. Upon reading it recently I was amazed at the lucid arguments that Paine proffered, and the clarity / succinctness of his style. That alone was enjoyable enough for me to recommend this classic. However, there is more....as I got used to the language and style, and as I checked-out some of the footnotes, I began to feel more connected to the culture of those troubled, and hopeful, time. And in that sense the content is in some ways generalizable to our current time. (I have started to look into more of the life and writings of Thomas Paine. What an interesting and mercurial man he was.)

narration was great, finished in a few days on commute to work. Strongly recommend a.

Comments from a reader

This is definitely a work for historians to read. It should be read if you want to know why the States sought independence.

I typically don't read books like these because sometimes history is written in a boring format/tone.
I did however enjoy this book as I felt Thomas Paines power, frustrations and wittyness upon writing these pamphlets.
I really enjoyed having a better sense of the mix feelings the general public, and political representatives back. The fear of the unknown and stepping into the birth and acceptance of a new Nation without Great Britain.

Well done. Paine based many of his arguments, rightly so, on th Bible. Great background for th Declaration of Independence and the Constitution.

Our history and having this knowledge prevents a repeat of Tyranny or oppression! This book is well worth the time and efforts to listen or read as we are Americans and should always seek the truth of our history.

Everyone should read this!!

Amazing book that every person should read.
Simple read. Quick to every point. Well written.

A brilliant argument to the American colonies to move forward with independence from England. May America long remember Thomas Paine!