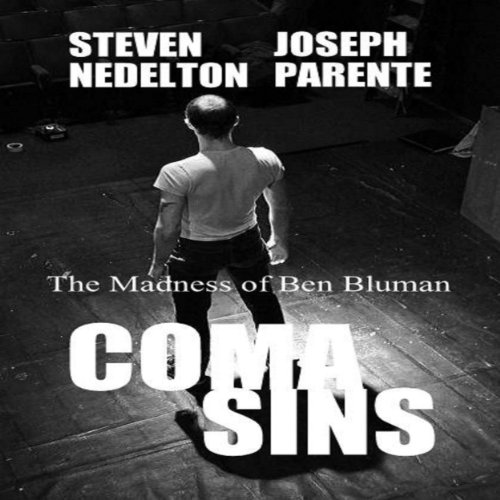 Coma Sins is a fictional story about a seriously ill man. Ben Bluman is middle-aged and suffers from untreated schizophrenia.

The tale starts with two policemen who, while driving drunk on a particularly nasty night, run into a pedestrian trying to cross a street. Afraid that the man is dead, they try to conceal his body. But the man is not hurt seriously. Suddenly awake yet unable to control his actions, he murders both policemen. Later that same early morning, partly dazed by the accident, he falls against a fire hydrant and passes out.

For the next ten days Ben Bluman is lying unconscious, in a coma, in St. Bernard's Hospital in Chicago. And during that time he relives various parts of his life. He recalls being offered the job of a lifetime in a small and rising company. He remembers being hired on the spot, as CFO and Vice President. He remembers the owner, Bob Janklaw, the employment manager, James Sims and Mary White, Bob's assistant, the brains of the operation. He also recalls the moments of his madness in a local hotel room, where he sees the monstrous image of himself in the hotel room mirror. Those are the moments when he decides to destroy the leadership of the company and the company itself. His plans work out and Janklaw's, Sims' and Mary White's violent deaths are the climax of his rampage. At that point, he seeks help at a hospital for the insane.

This time, however, instead of being treated, he becomes a guinea pig in a government experiment with the seriously deranged, controllable killers. Sent to a special clinic and then fed experimental drugs, he eventually murders a politically inconvenient journalist at the New York Times.

When Bluman finally wakes up from his coma and runs from the hospital, he tries to reenter the world of normalcy though only partly medicated. As a consequence, his insane dreams and sickness continue to hound him. For a few months he works as a private eye in his half-dream state but, during the few moments of his uncontrolled insanity, he confronts a higher up officer of the Salvation Army in Chicago, and without a real cause for his angry outburst, he brutally murders her.

In his last moments of madness, he causes death and destruction at a children's amusement park. Finally, when faced by the police, by now on his tracks, he commits suicide by throwing himself out of his third floor apartment window.

What listeners say about Coma Sins

Coma or Madness - You Decide

Welcome to Ben Bluman’s world. Is he in a coma living a dark life from a bed in the ICU of Saint Bernard’s Hospital in Chicago or is he purely evil and descending deeper into the depths of madness? Is he a control freak or is he insane? The decision is yours, and one you will not make lightly.

The story of Ben Bluman pulled me in from the very beginning. I was captivated by his struggles and how things can go terribly wrong even when the best intentions are there. I couldn’t wait to hear what happened next and was unprepared for the shocker of an ending. Whether you read or listen to this book, you will be unable to stop until you are done.

This was an excellent story written by two masters of suspense, Steven Nedelton and Joseph Parente. It was narrated by William Dupuy, who has a voice I could listen to all day.

Who is the Villain Here?

When Ben Blumen is not strangling or stabbing people, or throwing them out of a window, he seems like a nice enough guy. He has a job, he has a friend and work colleagues, he has a nice apartment, goes out to lunch and dinner, and he even has dates. I found myself rooting for Ben, almost all the way to the end of “Coma Sins,” this excellent crime noir thriller written by Steven Nedelton and Joseph Parente, and narrated by William Dupuy.

Right from the beginning of this suspenseful story, Ben had my sympathy as he escapes from two policemen who ran him down while driving drunk and are about to finish him off. Even when he kills the cops, I was still in his corner. With two against one, Ben was the innocent and injured party at this point. As the writers wind this tale tighter and tighter, I was not easily persuaded of Ben’s guilt. Even when I realized that Ben suffered from schizophrenia. I questioned who was at fault. The government that used Ben in its own sinister conspiracy? His shrink who played along? The doctor who gave him medication, not to control Ben’s illness, but to turn him into a puppet that does the government’s bidding? The web of lies and deceit that leaves Ben unsuspecting of the truth is so enormous that my sympathies stayed with him almost to the end. Like Ben, while he lies in a coma, I never knew what was the truth or the nightmarish dreams of an innocent victim.

Well done, Steven Nedelton and Joseph Parente, and William Dupuy does an excellent job of narration!