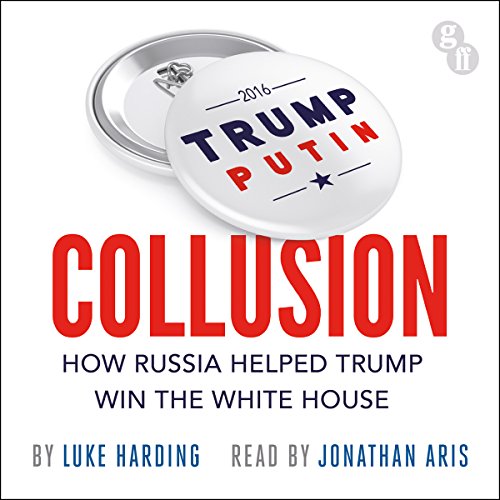 A gripping exposé about the biggest political scandal of the modern era.

Moscow, July 1987. Real-estate tycoon Donald Trump visits Soviet Russia for the first time at the invitation of the government.

Washington, January 2017. Steele's explosive dossier alleges that the Kremlin has been 'cultivating, supporting, and assisting' Trump for years and that they have compromising information about him. Trump responds on twitter, 'FAKE NEWS.'

In Collusion, award-winning journalist Luke Harding reveals the true nature of Trump's decades-long relationship with Russia and presents the gripping inside story of the dossier. It features exclusive new material and draws on sources from the intelligence community.

Harding tells an astonishing story of offshore money, sketchy real-estate deals, a Miss Universe Pageant, mobsters, money laundering, hacking and Kremlin espionage. He shines a light on powerful Russian players like Aras Agalarov, Natalia Veselnitskaya and Sergey Kislyak, whose motivations and instructions may have come from Vladimir Putin himself.

The special prosecutor, Robert Mueller, has already indicted several of the American protagonists, including Trump's campaign manager, Paul Manafort. More charges are likely as the crisis engulfs Trump's administration. This audiobook gets to the heart of the biggest political scandal of the modern era. Russia is reshaping the world order to its advantage - this is something that should trouble us all.

What listeners say about Collusion

A little dry in parts, but a clinical case

Having finished Collision by Luke Harding I’m convinced that Russia most certainly was helping Donald Trump’s campaign and they did this to further economic interests of the Russian Elite. There is an awful lot of circumstantial evidence outlined in this book that suggest the Trump campaign were also involved. The only missing element is the knock-out punch: I guess we have to wait for the Mueller probe to see how this ends.

Highly recommend to all. Surely a candidate for literary awards for non-fiction. Very enjoyable, informative and explains spy craft and the tangled web of Russia extremely well.

worth a few reads

Thanks to Luke Harding for adding to the body of work that is helping us understand the White House today. The book requires a level of concentration -- it's not a something to listen to while distracted -- but it is well worth the effort. The author knows what he is writing about and delivers it with a punch.

Luke Harding's journalism has given us a depressing but gripping take on one of the most blatant, brazen and frightening political twists of modern times: that Russia, based on it's existing cod war, KGB and espionage infrastructure has launched cyber war on the West, and, Manchurian Candidate style, installed its own puppet in the Whitehouse. One that fit a template they had for such a candidate: vain, paranoid, ultra-wealthy, and with powerful connections, and the media presence and warped charisma to gull a large percentage of the American presence.
The book alternates between recent events of Trump's candidacy and presidency, and the larger backstory of Russian politics and espionage. The characters range from the naïve and utterly stupid to the ruthless Machiavel. Guess which one is which. It's not Trump with his hand rammed up the puppet's hole and squeezing.
For the audiobook the Russian story can be at times confusing, those long Russian names crossing and criss-crossing can tax the short-term memory. But it is very much worth the effort.
Luke Harding writes with a ruthless objectivity, but he cannot hide his dismay and contempt for Trump his Presidency, those who have profited and helped bring it about, and the amoral ruthlessness of Putin. The narrator, Jonathan Amis, does a good job of switching between a clear, dry delivery and absolute incredulous disgust. The switch from one to the other is sometimes almost comical.
It's the more intellectual sibling of Fire and Fury.
Read, and pray for the light to dawn.

What's audio book for couldn't put it down?

Written and performed like the best Le Carre novel you've ever read, Collusion would be written off as being "a bit far fetched" if it wasn't true! Luke Harding presents his methodical research brilliantly. He avoids conjecture and presents the facts, along with background details that provide supporting evidence and depth. I'm sure future historians will find this book invaluable.

this is my first political book off audible. this reads better than fiction even though it's all true. the extent of Trump's involvement with Russia and money laundering should be public knowledge. he's a tyrant and should be in jail not running America .
very well read especially the Russian name pronunciations.
it is amazing in its depth and extent of research and I feel much more informed after hearing it. clearly the writer believes his own evidence and I hope trump goes away soon.

Where does Collusion rank among all the audiobooks you’ve listened to so far?

The best I've listented to of this genre.

It has been well researched and well written.

I couldn't stop listening. This book is a must read for all who want to make some sense of the times we live in.

Absolutely excellent. Mr Harding has pulled together a phenomenal amount of material from a wide range of sources, and made it into a coherent narrative. A must-read for anyone interested in the current worrying confusion and disintegration of American and global politics. Highly recommended.

This book is in-depth and enlightening. It reads like a terrific thriller, only it is not a work of fiction.

The author slowly builds up an incredibly strong case for collusion and one that goes back over more than three decades. If this were a movie plot it might feel too fanciful be true, but the evidence presented by Harding is both detailed, compelling and damning.

Interestingly this book was written in secrecy and released somewhat unexpectedly. The book provides an insider's perspective - which is fascinating.

I very much enjoyed reading it and finished it over the course of a couple of evenings. This book is completely up to date as of November 2017 and I very much look forward to the follow up a couple of years from now, detailing the next steps in this ongoing and as yet unresolved political saga.

It will almost certainly leave you gobsmacked but comes highly recommended. I would hope that everyone with an interest in the Trump/Russia situation would have an opportunity to read this.

If you're interested in US politics and particularly what's happened with the current administration and Russia, you'll be captivated with this book. This is an excellent example of good journalism and Luke Harding is on top form.

Bought the paperback book and enjoyed it so much that I wanted to read it again, this time on audible. I've read many Trump/Russia books but this one gives you the facts and lots of background details and reads/sounds like a novel but like I said, factual. The reporting in this book can be backed up by what came out after this book finished, in the Mueller report and congressional hearings. Incredible book and I highly recommend this!

"Follow sex and money" in an attempt to ascertain why and how Trump became the president of America . . . This book is so fascinating, it listens as a well - paced spy thriller, though it is a real life and fact based political story. Evidently, Putin's regime tilted the results of presidential elections in US, thus getting an unlikely, semi-literate self-publicist Trump elected. The story is brilliantly investigated and written in a fascinating and gripping way. Every politically aware American must listen to this story. As well as every Westerner, as it so alarmingly uncovers hidden and wide spread tentacles of Russia, its growing and often hidden, hard to detect meddling in the politics of democratic world.
A clear and crisp narration, very easy to listen.