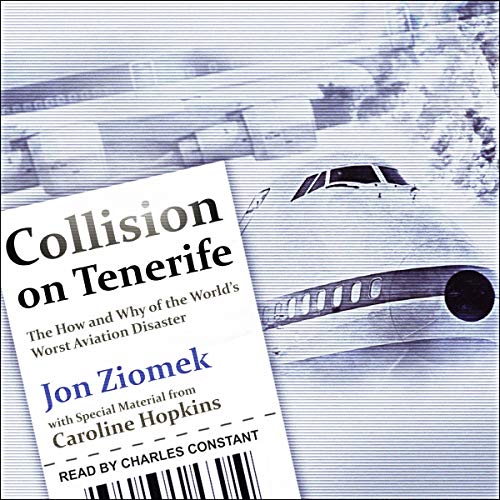 The world's worst air disaster happened more than 40 years ago on a remote Atlantic Ocean island, when two fully loaded 747 passenger jets collided after a horrendous series of human errors.

One of the jets, KLM Flight 4805, was traveling more than 150 miles an hour and was within seconds of lifting off when it crashed into Pan Am Flight 1736 taxiing in its path. The loss of lives was staggering - 583 dead. The crash happened after a lengthy series of major and minor human errors. In the intervening years, has aviation advanced to the point that such a disaster can't happen again?

In this riveting account, written from the perspective of the passengers in the cabin as well as the crew members in the cockpits, Jon Ziomek explains how this largely forgotten accident took place - and what has happened since to reduce the possibility of another such catastrophe.

What listeners say about Collision on Tenerife

I found this book to be both emotional and informative.

it gives a visceral recount of the crash as well as an overview of what safety precautions were implemented after the disaster.

Good look at a disaster that never should have happened.
Lessons:
(1) Impatience is never a wise response to inconvenience. (I'm talking to you, KLM.)
(2) Pay close attention to the flight attendant when he or she is providing pre-flight instruction on emergency procedures.
(3) Memorize location of nearest 2 exits.
(4) Wear flat, comfortable shoes on your flight.

This was a great listen from start to finish. Anyone with an interest in aviation should enjoy this book.

Fascinating and detailed account, well narrated, good balance between the objective facts and the human story. I loved it and I will listen to it again.