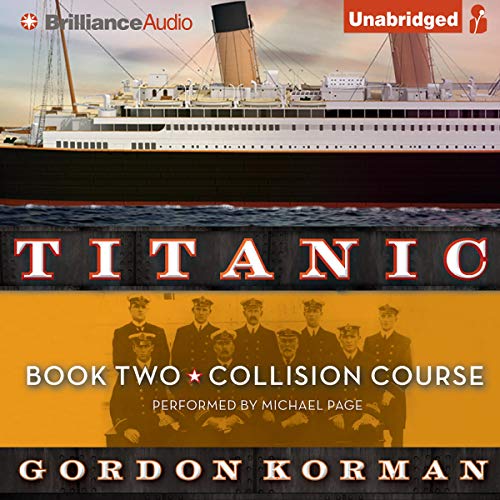 There’s a killer on the loose on the Titanic  -  and the only people who know are four kids. Within both the luxury of the cabins and the dark underbelly of the engine rooms, Paddy, Sophie, Juliana, and Alfie have found themselves tangled in a maze of mysteries, each one deadlier than the next.

Even on a ship as big as the Titanic, the young passengers are finding there are very few places to hide. And when the ship hits an iceberg, the voyage becomes more dangerous than ever.

What listeners say about Collision Course

The Story Hinges on the Characters

What made the experience of listening to Collision Course the most enjoyable?

Since we know the Titanic sinks the story hinges on the main characters and their lives before and duri9ng the voyage. The children is this story are made to have poignant personalities and difficult situations to overcome.

What other book might you compare Collision Course to and why?

There are so many Titanic stories it would be hard to hone it down to just one.

He did a great job of portraying different voices

It was an enjoyable book, but I am not compelled to get the next one. Maybe sometime.....

Narrator had a ton of voices. The 3 book series was entertaining for my 10-17 yr old kids during a road trip. And as a plus, my husband and I liked it too.

Jack the Ripper, Sophie, and Alfie's confrontation on the ship's deck, just as it hits the iceberg and starts to take water sidetracks the beginning of the more serious concern of a sinking ship, catching them unprepared and most unaware of the dangers ahead. The variation of each character was well performed by the narration using different tones of English accents & language tones.