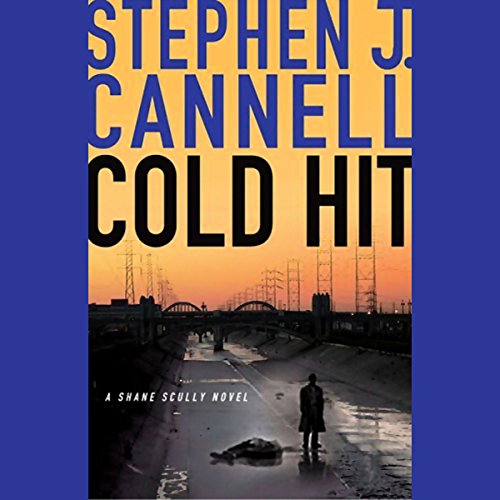 Shane Scully and his partner are assigned to the case of "the Fingertip Killer", a serial murderer preying on homeless veterans in Los Angeles. Every two weeks he strikes: he beats his victims, then shoots them in the back of the head. Once they're dead, he cuts off their fingertips, closes their eyes, and tosses them in the river.

The latest killing, however, does not quite fit the pattern. It appears to be the work of the Fingertip Killer, but Scully suspects an elaborate copycat murder meant to hide a criminal conspiracy. A bullet pulled from the victim's skull produces what police call a "cold hit", an unexpected ballistics match linking one unsolved case to another, and the previous victim was an LA Police officer, killed 10 years earlier.

After heavy-handed FBI agents throw him off the Fingertip Killer case, Scully teams up with his wife and boss, Alexa, and a pair of tough cops from the LAPD's anti-terrorism squad. Outside the law and deep undercover, they fight to see justice done for the slain officer, and, possibly, to unravel a murderous plot with connections high up in the Homeland Security office.

"Cannell's brand of thriller is served straight up, and he knows how to cut to the chase." (The New York Times)
"Cannell's writing keeps improving, too; fans of the Scully series will note both an added depth and a new stylistic panache in this installment. With every book, Cannell moves closer to joining crime fiction's A-Team." (Booklist)

This was my first SJC novel. I'm glad I downloaded it. Kept me entertained and had a good storyline. One of the deciding factors in getting this download was because it is narrated by Scott Brick. Fantastic reader, as we all know by now.

I only have two small problems with this book. SJC is pig ignorant when it comes to firearms. You'd think a fellow with a mantle full of Emmys from screenwriting "shoot em ups" in the 80s would at least have a basic grasp of the obvious when it comes to guns. Not this guy. My second complaint is with the cheesy dialogue. What's with this "nanner-nanner, boo-boo" narrative? It sounded like a bunch of junior high kids that just learned profanity. SJC needs to take a break from writing long enough to read a couple of Elmore Leonard novels and get his dialogue on track.

SJC is obviously on the political left but he didn't try to ram his beliefs down the reader's throat. He showcased the terrifying powers the feds now have in the post 9/11 world and the potential for abuse. But he did it in perfect harmony with his plotline and didn't breeze off into a two hundred page Tom Clancyish diatribe. As I said, it was a very good storyline. Lots of similarity to Michael Connelly's Bosch series but somehow a cut above Connelly on the action and intensity levels. And the side story into the main character's personal life was a nice character development trick. So don't worry about "catching up" with the prior novels in this series before reading this one.

35 of 36 people found this review helpful

A bit too formulaic

Are there any "normal" people working in the LAPD, or the FBI for that matter,(except for the hero's wife)? And "code 3" means sirens going, not "code 2". Story became a bit tedious as we had to go through the political screeds while waiting for the plot to develop. I've read many LA detective books and this one just doesn't measure up for me. I could pretty well see what, and who, was going to turn up next.

9 of 9 people found this review helpful

I usually listen to my Audible programs during my 1.5 one way commute, so getting in 3 hours of listening per day is enough for me. But this book, Cold HIt had me so engaged I even brought it into the house and listened to it while I soaked in the tub!

I stumbled across Stephen Cannell's book because I am a HUGE Michael Connelly fan but have run out of his books to listen to. A review of Cannell called his writing style similar to Connelly. It is and this book was great. They are so similar in style and setting that I would almost think they were written by the same author. Regardless, I will be checking out other Cannell books.

You have to stay on your toes to keep all the players straight....I enjoyed it and had a hard time turning it off. Scott Brick was fabulous as the narrator and brought Shane Scully to life. You won't be disappointed if you enjoy detailed descriptions of events that are stomach turners!

Very timely, vividly showing how the Patriot Act can affect even policemen in their day to day jobs. The reader is excellent well modulated and articulate. The plot is a good one with enough twists for everybody.

Cold Hit hits bottom & misses it's point with me

After careful consideration of this title I chose to get it. After all the reviews seemed good enough. However, I was very disappointed. I gave one star to the reader, not the book. This book lacks what it takes to be a good book. I like being wrong at the end of a whodunit. But this book was so easy to figure out and it just gets worse after that. Not because you figured it out (since you really don't know that for sure, yet) but because it is at this point in the book when the story goes in too many directions at once. The sub-plotting is very sloppy. The characters are not memorable in any way. There were a couple of times when a characters mention surprised me because I didn't realize they were even in the story. What a shame I wasted a credit on this title. Save your credit or use it for something better than Cold Hit.

6 of 8 people found this review helpful

Can I have some more Scully please...

Shane Scully solves another one... An interesting read. Lots of twists and turns. Very enjoyable - and as usual, when it was finished, I wished there was just one more chapter.

Glad I have MY digits!

This was my first experience with this author, and He did not dissappoint. I listen to quit a few books on tape. It helps me seperate the books that I am reading from the books I am listening to. It breaks up the bordom. Anyway, this book had me into it almost immediately and I was stoked to listen to the very end. I was confused from time to time because of the sheer number of characters in the book, but in the end it was all wrapped up neatly, and I understood exactly what went down.

Enjoyed the characters that were realistic. A few turns that I didn't expect which was nice.