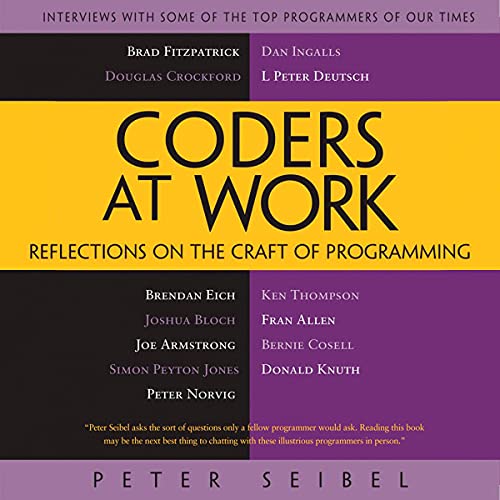 Peter Seibel interviews 15 of the most interesting computer programmers alive today in Coders at Work, offering a companion volume to Apress’ highly acclaimed best-seller Founders at Work by Jessica Livingston. As the words “at work” suggest, Peter Seibel focuses on how his interviewees tackle the day-to-day work of programming, while revealing much more, like how they became great programmers, how they recognize programming talent in others, and what kinds of problems they find most interesting.

Hundreds of people have suggested names of programmers to interview on the Coders at Work web site: codersatwork.com. The complete list was 284 names. Having digested everyone’s feedback, we selected 15 folks who’ve been kind enough to agree to be interviewed:

Bernie Cosell: One of the main software guys behind the original ARPANET IMPs and a master debugger

L. Peter Deutsch: Author of Ghostscript, implementer of Smalltalk-80 at Xerox PARC and Lisp 1.5 on PDP-1

Brendan Eich: Inventor of JavaScript, CTO of the Mozilla Corporation

Donald Knuth: Author of The Art of Computer Programming and creator of TeX

Peter Norvig: Director of Research at Google and author of the standard text on AI

Guy Steele: Coinventor of Scheme and part of the Common Lisp Gang of Five, currently working on Fortress

What listeners say about Coders at Work