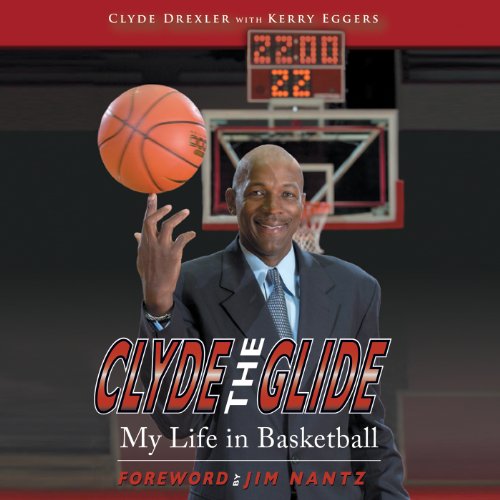 In his own words, superstar Clyde the Glide tells his complicated story of success from his humble beginnings in a single-parent household to his arrival in basketball's hall of fame. He even allows fans into his personal life: the arrival of his daughter unexpectedly, his child-support battles with her mother, and his own marriage to another woman. Gregory Gorton's performance is thoughtful, funny, and warm. Because the story incorporates quotations from many people in Clyde's life, listeners should pay careful attention to who is speaking. Overall, this audiobook will certainly fascinate basketball fans everywhere.

Autobiography of Hall of Fame basketball star Clyde Drexler, one of basketball history's most dynamic players. Through his fifteen-year career as an NBA player, Clyde Drexler played with elegance and flair, leadership and poise, integrity and an ability to come through in the clutch. He led the Portland Trail Blazers to the NBA Finals twice and helped the Houston Rockets win the NBA championship in 1995. A ten-time All-Star, a member of the 1992 Olympic Dream Team, and now a member of basketball’s Hall of Fame, Drexler reached the top of his profession without revealing many of his inner thoughts on himself or the game.

Now, Clyde the Glide is finally ready to talk to his fans. From growing up in a single-parent household to life as a local teen legend, and eventually getting teamed with Hakeem Olajuwon to guide the University of Houston into the NCAA Final Four twice in the early 1980s, Clyde the Glide tells it all. Famous NBA figures such as Maurice Lucas and Patrick Ewing even add their two cents. Without a doubt, Clyde the Glide is a must-read for every die-hard basketball fan.