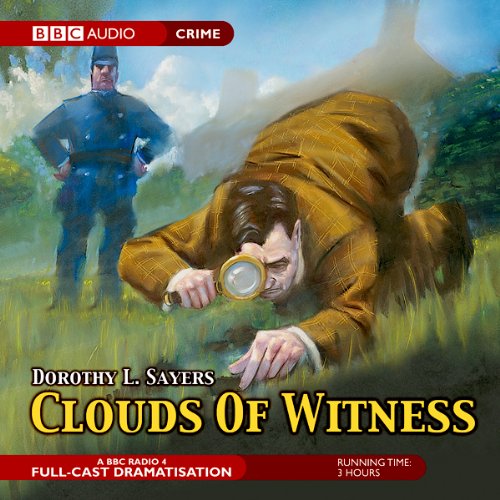 In a shocking scandal, the likes of which has not been seen in the English aristocracy since the 18th century, the Duke of Denver stands accused of the foul murder or his sister's fiance, shot through the heart on a cold, lonely night at Riddlesdale Hall in Yorkshire.

The Duke's brother, Lord Peter Wimsey, attempts to prove Denver's innocence, but why is the Duke refusing to co-operate? And what does his sister, Lady Mary, know about the affair?

Trying to reveal the truth, Wimsey uncovers a web of lies and deceit within the family and finds himself faced with the unhappy alternative of sending either his brother or his sister to the gallows - until he himself becomes a target.

What listeners say about Clouds of Witness (Dramatised)

Good acting with a good clean fun storyline. No bad language, no violence, what there is, is a script which leaves you to use your imagination - I love these old dramas. I have all 10 & wish there were more.

I did enjoy this book but got a little lost and had to keep going back to try to follow the story. Not the fault of the book, just too busy whilst trying to listen. As usual Ian Carmichael does a brilliant job as well as the others that lend voice to the production.

Well worth listening to. The story is good and the running time is just right.

Great performances all round

All of the Wimsey radioplays are great, and this is no exception. The casting is perfect, and the voice actors all bring across the right feelings. Only the gunshot sound effects really seemed ridiculous...

Ian Carmichael & Co. are excellent, as ever. Brilliant performance and a good storyline. Unfortunately slight glitch in the download - two chapters are repeated which is slightly irritating. But the performance still hugely enjoyable.