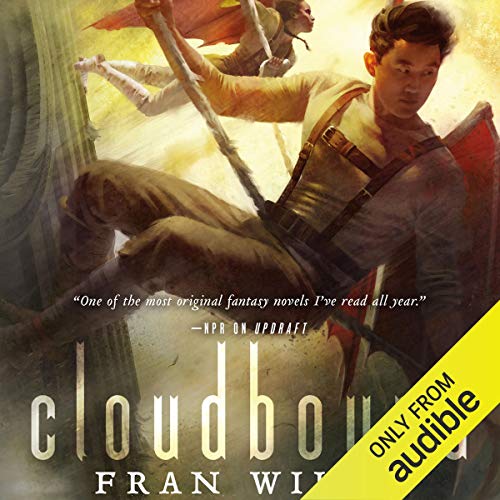 After the dust settles, the City of living bones begins to die, and more trouble brews beneath the clouds in this stirring companion to Fran Wilde's Updraft.

When Kirit Densira left her home tower for the skies, she gave up many things: her beloved family, her known way of life, her dreams of flying as a trader for her tower, her dreams. Kirit set her City upside down, and fomented a massive rebellion at the Spire, to the good of the towers - but months later, everything has fallen to pieces.

With the Towers in disarray, without a governing body or any defense against the dangers lurking in the clouds, daily life is full of terror and strife. Naton, Kirit's wing-brother, sets out to be a hero in his own way - sitting on the new Council to cast votes protecting Tower-born, and exploring lower tiers to find more materials to repair the struggling City.

But what he finds down-tier is more secrets - and now Nat will have to decide who to trust, and how to trust himself without losing those he holds most dear, before a dangerous myth raises a surprisingly realistic threat to the crippled City, in Cloudbound.

What listeners say about Cloudbound

Naton is one of the dumbest protagonists I have ever encountered. Over and over he has to relearn things he already knew. I really enjoyed the first book but Naton's stupidity was so bad I couldn't even finish the second one.

The first book of this series ends with the destruction of a governing system based on secrets, politics, and power-plays that the society in the towers is thankful to be rid of. In Cloudbound, they have replaced it with a new government with exactly the same problems, and I spent the first third of this book angry that no one seems to have noticed this.

I was about to give up when the main characters are pulled into an adventure that starts peeling away the secrets and exposing the worldbuilding I bought this book to experience. Fran Wilde has created a complex and fascinating world here. Tower society clearly has forgotten more history than they can imagine, and it is fun watching the pieces come together.

Sadly, it seems as if Fran Wilde simply sweeps aside the world she's crafted when the story needs it. [Very Minor Spoilers Follow.] For example, in Updraft we learn that no one goes below the clouds; those who fall are considered dead and lost forever. In Cloudbound, circumstances force the protagonists to venture into the clouds, but when opposing forces give chase, suddenly no one seems to remember they grew up with a paralyzing fear of the clouds. Health issues caused by flying downward and explained at length at one point in the book, and then later seem to be totally ignored. I also find it completely unclear just how far characters keep falling while doing battle on the wing, and how any of them manage to survive.

We discover some massive, if not particularly surprising, truths about the city by the end of Cloudbound, and I look forward to seeing how Fran Wilde explains them in the final book in the series.

Middle books usually have trouble keeping my attention, but Cloudbound was gripping even though I didn’t quite like the POV change from
Nag to Kirit. The end was great though, some fascinating revelations and world building at the end.

Great worldbuilding and a ton of adventure. It's shame that Hayao Miyazaki is retired; this would make one hell of an anime!

Not as captivating as the first book.

Perhaps Nat is just boring...did not pull me in. I cared less about him than I did when presented through Kirit's eyes

Ok, so once I purchase a book or audio book I like to finish it. I have had a few that I absolutely could not. Mainly due to horrible performance. This book at least, has a good performing narrator. With that said, I was just not really interested in the story and felt a disconnect from all the characters. It was worse than the first book by far. I would not recommend this unless you are bored and having nothing else to choose from.