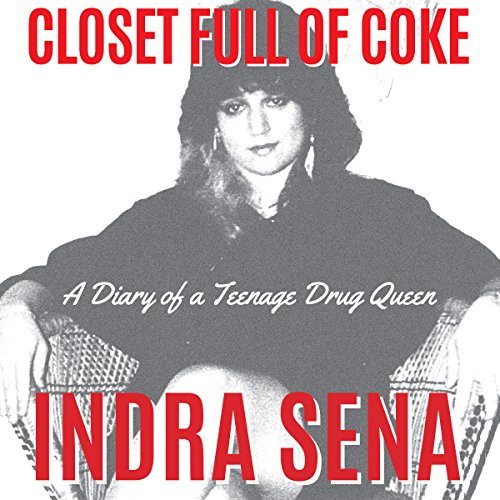 Closet Full of Coke: A Diary of a Teenage Drug Queen

Closet Full of Coke: A Diary of a Teenage Drug Queen

A Glimpse Inside a Hidden World

Narrated by the teenage girl who lived it, Closet Full of Coke tells the true story of how a New York suburban fifteen-year-old girl's savvy and wit helps turn the small-time drug business of Armando, a Colombian drug dealer, into a multi-million-dollar cocaine operation that puts them on the DEA's Wanted List.

This intimate diary gives readers a fast-paced glimpse of the couple’s speedy rise to riches, and their inevitable descent.

These wannabe drug lords of the 1980s New York-to-Florida drug scene end their story only three years later with an untimely death, betrayal, and revenge.

Here is a true account of drug dealers whose obsession with money, power, sex, and glamor drives them to a lifestyle of deceit and recklessness, ending in tragedies that destroy lives forever.

This is no ordinary memoir; this is Memoir Noir

I wanted the foolish girl I once was to tell her story without interruption. The result is a diary written like a novel. There is no reflection or analysis. There is a salacious story full of colorful characters and dialog, told by the teenager who lived it.

Drug dealers have an interesting ethos unknown to outsiders. They live by elaborate rules and codes, and use intricate methodology to conduct business. They are far more organized than people imagine, and they see themselves as business people and entrepreneurs. Serious dealers who want success don't use drugs and they deal to other dealers, not to users.

Readers have called it "haunting," "a car wreck you can't look away from," "a roller coaster ride," and "Alice in Wonderland meets Scarface." So if you like the edge of your seat, hold on tight and listen to my story.

Deeply flawed and hard to listen to.

If you dream of a version of Scarface (minus the intrigue, politics, character arcs or explosive violence) as recounted by one of the girls from Clueless (minus the self-aware humor), this may interest you

Would you ever listen to anything by Indra Sena again?

The story opens with the inevitable disclaimer 'this story isn't about glamorizing the lifestyle, I wish I'd never done it, blah blah' then the narrator just emphasizes the depthlessness of the central character with her inflections. 'OMG i gave everyone free cocaine and they liked me! LOL!'// 'OMG I like totally gave cocaine to every guy i met and flirted with them all and like, they all tried to sleep with me OMG how did THAT happen!'// (NB the 'OMG's aren't literally vocalised, they are implied by the delivery.

It shows that you may live a wild life, but it isn't fodder to write a book without some sort of transformation.

The author comes across as the same teenage girl she was when all of this happened. The level of glee she gets in retelling stories of how everyone liked her when she gave out free cocaine is galling. She'll be halfway through a story about her excruciatingly chauvinistic boyfriend , and throw in a reference to how expensive her toilet seat was. If you tell a story of the violent ups and downs of a cocaine dealing lifestyle, you want a character arc, some drama, a narrative through-line, and a narrator who doesn't get the words wrong (you don't PURSUE a menu, you PERUSE it).

a riveting and touching story

the author brings you into her world for two years while she gets involved with the drug trade and the life surrounding it. as a reader, one empathizes easily with her through the whole thing. it leaves a lasting impression. well worth it. buy this book.

The accents that the narrator used was absolutely horrible. I couldn't finish the book!!!!
Noooooooo

i loved the narrator of this book. she really made this common story come alive.....she made me feel like the characters were my friends too!

What would have made Closet Full of Coke: A Diary of a Teenage Drug Queen better?

For a book written about someone 30 years ago it was pretty direct and specific. The person reading the book was WAY to dramatic and mispronounced WAY to many words.

Has Closet Full of Coke: A Diary of a Teenage Drug Queen turned you off from other books in this genre?

No, I am just turned off the the Auther and the person that read the book.

I had high hopes for this book but all around I have been let down. I am starting to thing the people writing reviews for this book are friends because nothing about this girls life was all that bad. She had horrible parents but no abuse either mentally or physically she should count herself lucky. What is see is a Brat that dropped out of school to sell drugs. I wish I could get my credit back for this one.