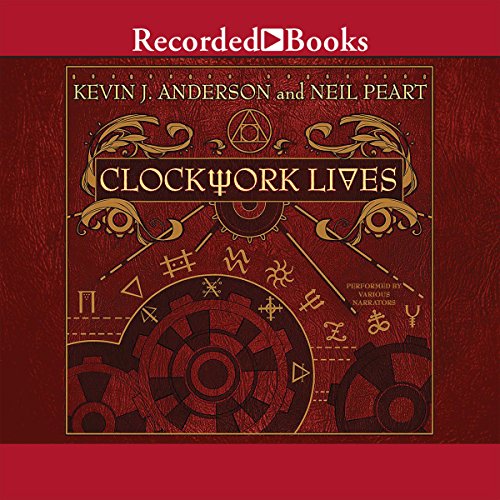 Some lives can be summed up in a sentence or two. Other lives are epics. In Clockwork Angels, number-one best-selling author Kevin J. Anderson and legendary Rush drummer and lyricist Neil Peart created a fabulous, adventurous steampunk world in a novel to accompany the smash Rush concept album of the same name.

It was a world of airships and alchemy, clockwork carnivals, pirates, lost cities, a rigid Watchmaker who controlled every aspect of life, and his nemesis, the ruthless and violent Anarchist who wanted to destroy it all. Anderson and Peart have returned to their colourful creation to explore the places and the characters that still have a hold on their imaginations. Marinda Peake is a woman with a quiet, perfect life in a small village; she long ago gave up on her dreams and ambitions to take care of her ailing father, an alchemist and an inventor. When he dies, he gives Marinda a mysterious inheritance: a blank book that she must fill with other people's stories - and ultimately her own.

Clockwork Lives is a steampunk Canterbury Tales and much more, as Marinda strives to change her life from a mere "sentence or two" to a true epic.

What listeners say about Clockwork Lives

What an adventure!!!
Neil and Kevin wrote this story as a complement to the Clockwork Angels novel that can be read separately and still complement each other.
Amazing life story, full of references to Rush lyrics. Every Rush fan should read the Clockwork novels.
Thanks Kevin and RIP Neil Peart

Even better than the first novel and expanding on the first. If you enjoyed the first one you will enjoy this one too. Bravo!

Order versus Chaos versus Freedom?

Definitely a great collection of stories. As with the first book, the authors leave you with the impression that an ordered existence can't be happy and free though. I suspect they were shooting to suggest balance but either way it doesn’t marr the story lines. I definitely enjoyed reading another edition of adventure in this fanciful steam technology world.

well written and narration was spot on... suck a gripping tale. highly recommended.. Rush fan or not.. great read..

This was a great book with great narration. I highly recommend it. A must listen.

A rollicking tale, providing a lot of depth to the clockwork word. if you're a Rush fan, even better! you'll love the tiny references to songs and lyrics skillfully tucked into the crevasses of the story! Neil and Kevin did a fine job!

Allegorical tale of a father's regrets resolved through his last wishes for his daughter. Excellent performance and story exposing readers to different philosophies of life while reserving judgement.

a great sorry, wonderfully narrated, unique and kept me interested. loved all the lyrical quotes that fitted seemlessly into the story. hope they make more in this series.

Better than the first book!

I enjoyed the first book, but this one is actually better. They also decided for Mr. Peart to not read it, which is a good thing. (Mr. Peart, if for some strange reason you're reading this, please don't be offended. You've got a laid back voice which isn't conducive to an exciting story) The story kind of reminded me of the Canterbury Tales, where different characters tell their own stories. There are several 'cameos' from the first book as well, but you don't NEED to read the first book to enjoy this one.
Good tale and told well!

Better than the original?

While technically a sequel, I'd guess you say this was more of a companion piece to Clockwork Angels. In some ways it surpasses the original. Either way enjoyable. Kudos to the production team on the variety and quality of voice talent that brings the sub-stories to life. A well used credit!

Filling In The Blanks

The premise of the book is great, however, it does get a little samey after a while

The subtle in-jokes or references to Rush songs or albums do bring a smile.

The Steamliner Captain, as this was probably the best tale of the book and had some direct relevance to the main character.

Probably not - or at least without seeing a film of Clockwork Angels first!

It's not the worst book I've listened to. These are the tales of some of the incidental characters from Clockwork Angels (a far better book). The format can grate a little, but all in all,, it's a reasonbable accompanyment

What made the experience of listening to Clockwork Lives the most enjoyable?

What was one of the most memorable moments of Clockwork Lives?

Marinda is the main character throughout. Her transformation in her outlook and perspective of life is enthralling

Disappointed when it finished. I hope the authors will continue with the series.