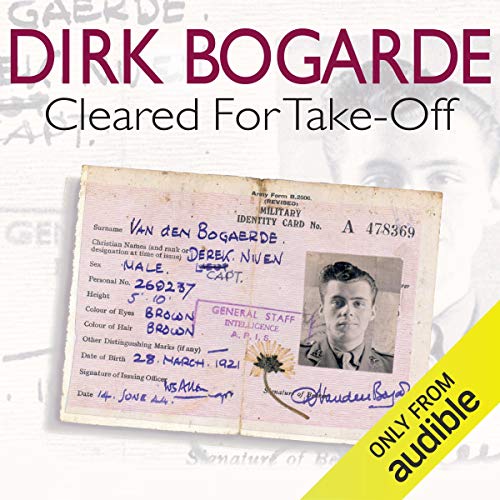 On his many reconnaissance missions in Europe and the Far East, the young Bogarde experienced the terror of enemy attack and the horror of its aftermath, together with the intense camaraderie and bitter humour of the battlefield. He also had, like countless others, a feeling of utter hopelessness at the war's end, when, as suddenly as the fighting had stopped, these youthful, but hardened comrades-in-arms were dispersed to find their feet in a traumatised world.

Less than a year after demob no one could have been more astonished to find himself starring in his third feature film with car and chauffeur and a five-storey house in Chester Row. He had somehow 'arrived' in the movies.

What listeners say about Cleared for Take-Off

Not his best book

Having greatly enjoyed A Postillion Struck by Lightning I was eager to read this earlier book. It's OK, but not as good. It dots all over the place in time even within a chapter. Some parts are very entertaining and the author is very frank about his life, but the lack of chronological progression makes it less engaging and confusing at times. It opens with some of his experiences during the Second World War thereafter flitting back and forth from his childhood to his move to France.
The author narrates his own words and does it very well.

Not just a great actor, a great writer as well. Hearing him read the story himself is just the icing on the cake. I absolutely adore this, as I have adored his other autobiographical works. His wonderfully languid delivery is wonderful to listen to. The stories themselves are fascinating and his wry humour is perfect. Absolute magic.

My Nanda used to drive this guy and always spoke highly of him to my mum. his acting was second to none highly recommended for those with an interest.

One of the best books I’ve listened to, I adore Dirk Bogarde, his life stories are fascinating and his narration is wonderful, as another reviewer says he does flit from one time in his life to another quite a bit but it’s just like listening to a friend chat away about his life. I love his wit, his humour and his honesty. I shall definitely listen, read and watch all of his works. Dirk was a lovely story teller and an absolute joy to listen to.