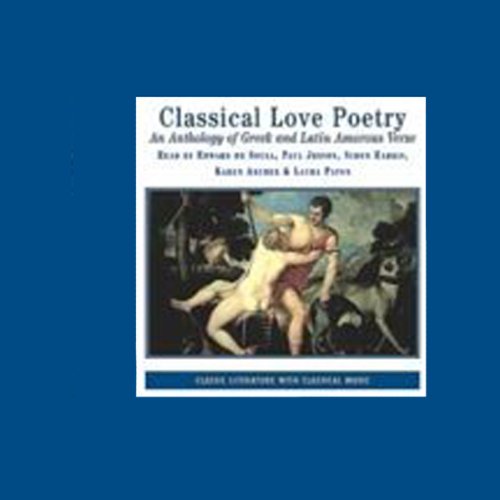 This anthology of beautiful verse combines some of the great Greek and Roman literature between the 8th century BC and the 2nd century AD. The works of Greeks Homer, Sappho, and Anacreon and Roman poets such as Lucretius, Catullus, and Virgil are performed with brilliance by Edward de Souza and Paul Jesson, whose eloquent styles capture each writer's brilliant lyrical flourish and metrical craft. The classical writers are mainly known for their tragedy, but as Classical Love Poetry shows in such selections as Sappho's Hymn to Venus, their remarkable work conveyed great passion and romance as well.

Many of us are familiar with the epic stories and legends of the classical world. This anthology, the only one of its kind on audiobook, gives an insight into a more lyrical and tender aspect of Greek and Roman literature. From Homer's lofty lines on the loves of the gods to the earthier verse of Catullus to his mistress Lesbia, this recording encompasses the major love poetry written between the 8th century B.C. and the 2nd century A.D. Translations are by British poets including Dryden, Pope, Johnson, Marlowe, and Byron.
(P)1998 NAXOS AudioBooks Ltd.; ©1998 NAXOS AudioBooks Ltd.