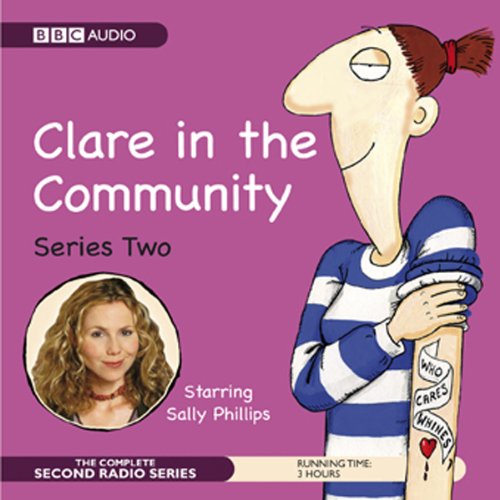 Clare in the Community

Here's the second in the Radio 4 comedy series based on the long-running cartoon strip in the Guardian's Society section. Clare (Sally Phillips: Smack the Pony, etc), like many before her, has entered a caring profession so that she can sort out other peoples problems rather than deal with her own.

A control freak, Clare likes nothing better than interfering in other people's lives on both a professional and personal basis. Secretly regarding herself as a cross between Mother Theresa and Wonder Woman, Clare tends towards self-importance and considers most other professions as trivial. She is in her early 30s, white, middle class, and heterosexual, all of which are occasional causes of discomfort to her. Each week we join Clare in her continued struggle to control both her professional and private life.

What listeners say about Clare in the Community

Biting satire played by characters all suffering from diverse versions of paralysis by analysis. psychobabble, arrogance and all the 'isms' get their fair share of scrutiny.

Clare in the community series two

Great comedy can listen over and over again. Up there with Cabin pressure. Will buy every series.

Loved this.As a retired social worker I find a lot of the characters very familiar and hilarious . Highly recommend.

Working closely with social workers as a Doctor, and from my background in social sciences I found this hit the right spot on humour, social commentary and poked fun everywhere.

As with much comedy it's often quite akin to tragedy and some of the issues covered are tragic.

If you want a laugh, a commentary on social policy from the front line in a humorous parody, this if for you. If not, get something else!

Very funny and could listen over and over again

classic radio comedy. really enjoyed it and the characters are so funny . have listened twice all the way through and still laughed out loud

This is not has laugh out loud funny has the first one, but it is still entertaining.