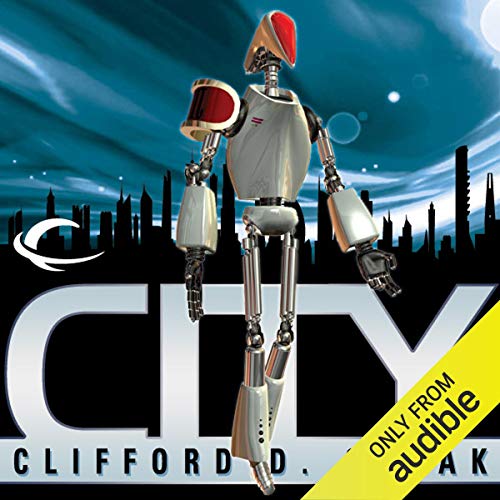 Jenkins was a robot. He was built to be the perfect worker, tireless and uncomplaining. But, quite unexpectedly, he also became a close companion to generation after generation of his owners as the human race matured, moved beyond the confines of its once tiny planet, and eventually changed beyond all recognition. And then, because he was a good and dutiful servant, Jenkins went on to serve Earth's inheritors.

Here is a masterful tale of an Earth overrun by ants, a series of parallel worlds ruled by dogs, and a Jupiter where the human race finds its Gold Age - if "human" it could still be called.

"Simak's unforgettable compassion and affection for all creation shines through." (scifi.com)

What listeners say about City

Does not stand the test of time

This is one of those classic pieces of sci-fi that simply doesn't hold up to the rigors of time. It's not terrible but it'd nothing I would consider noteworthy.

A fantastical recollection of humanity from the perspective of another race! At times the perspective makes you wonder about human influence and what the human race aspires to achieve!

This was a book I couldn't stop reading and it was also a book I couldn't stop thinking about once it ended. It's message was thought provoking. A story of a family, the Websters, the plot evolves into the ultimate destruction of humanity. And yet we see that other alien races in the novel tend to make similar errors as they, too evolve. Life's questions, such as "to kill or not to kill" and "what does it mean to be human" and even the more abstract scifi rule to not interfere with another race are prevalent throughout the novel. If you are looking for a light reading experience, this is not the novel to read. But if you are looking for a book that will evoke discussion and comment on the human condition, this is a gold mine. Do not let the age of the book fool you into thinking it is no longer pertinent. The story is more pertinent today than it could have been when it was first written. The author's own comment prior to the Epilogue was intriguing. The narrators were very good and overall, this was an excellent read. I am delighted I bought it.

This is a collection of connected short stories and novellas, recounting the decline of the civilization of Man and the rise of the civilization of Dogs. Obsolete usage intentional; these stories were written in the 1940s, with a couple of exceptions, and the underlying viewpoint is that of a midwestern American man of that era, born in 1904. In the case of Simak, that's a compassionate, kindly, humane, even in many ways progressive viewpoint, but it's not the viewpoint of someone whose formative years were the 1960s or later.

These stories chronicle thousands of years of history in relatively brief glimpses of a total of nine short stories and novellas, and the "notes" that tie them together and provide added context, to make them a novel. We follow the men of the Webster family; the Webster family's robot and household retainer, Jenkins; and the dogs. Or, as they start to become beginning in the third story, the Dogs, the uplifted species that will succeed Man.

The first two stories show the start of the unraveling of human civilization, due to, in fact, its success. Nuclear power as an energy source, creating wealth and independence from the need to gather in cities, combined with the existence of nuclear weapons, making cities fatal places to be if there's ever another war, leads to people dispersing into the countryside. Land is cheap outside the cities, and every man can buy acreage and build a luxury estate for his family. (And yes, the use of gender and possessive in that sentence is deliberate. As noted above, Simak's a good man, but not a man of even the late 20th century.) As technology develops (largely undescribed, but we see what are videophones more advanced than we have but entirely recognizable, as well as robots with AI that's still just a happy daydream for us), no one needs to leave home for any of the essentials or luxuries of life, and many don't. Agoraphobia becomes a significant and common problem, which has crucial plot implications in one of the stories, with consequences that reverberate down the centuries.

Seeing the flaws in human beings, one of the Websters, Bruce Webster, starts to work on the dogs, giving them the ability to speak, and the ability to read--including the physical modifications necessary to make these things physically possible for them, not just intellectually possible. We learn of, and encounter, the mutants, humans with far greater intelligence, and lacking the human instinct to gather and connect with each other. In each story we see the dogs on the road to becoming Dogs, advancing in intelligence and understanding. A crucial turning point is the story, "Desertion," where humans on Jupiter are sending out exploratory missions of humans transformed into lifeforms able to live on Jupiter outside the human domes--for the purpose of reporting back, with the awkward complication that none of them do. Finally the head of that project goes out himself, with just his dog, Towser, leading to the complete upending of the progress of humans toward dominating the solar system and expanding to the stars.

The notes frame these stories as the myths and fables of Doggish civilization, in a time when Dogs are pretty sure that Man is only a myth, a tribal legend from the early days of their race, before civilization developed. The one continuing character who ties all the stories together is Jenkins, the robot who served the Websters, and then inherited their responsibility to help the Dogs along their own path. There's an underlying sadness in these stories, a certain pessimism about humankind, intertwined with a love for both humans and dogs.

What's missing, almost entirely, is women. Women are mentioned from time to time, but there's only two women who become in any way real characters with their own personalities and views, and only one of them is outside of the roles of wife, girlfriend, daughter, secretary. I love these stories; I don't love that aspect of these stories. These are still fine and much-loved stories, but they are also period pieces, and should be approached with that in mind.

I bought this audiobook.

A very special kind of story.

A little Rickety around the edges as any novel from the 1940s imagining the far future would be, it is the only criticism of an otherwise remarkable narrative. A leading writer in the field of speculative fiction, Simak created his own sub-genre that explored the nature of humanity and the universe with optimism, compassion and gentleness. His words hold a special kind of magic, based on a undefined spirituality that sets him apart from the humanistic philosophies of so many of his contemporaries. Listening to his words, one cannot but help feel that Simak was one special kind of man. Probably not for everyone, this is not space opera, this is sci-fi as philosophy and literature.

Does not live up to the written description. Very disappointed. More about the Webster family that dogs.

Excellent and a must listen.

Just a great wonderful book and one that gets you to really thinking about the future of the human race. I can see some aspects of this book come to pass. A wonderful but sad sort of ending an ending like those of never being able to go home again because your home is no longer standing. The loss of an age you can never go back to, being force to go forward kicking and screaming.
Taken from the point of view of dogs is genus, one wonders just what it would be like to live 10,000+ years and be able to remember it all, a machine could handle it a human mind would go insane even in a mechanical matrix. The gift of a AI robot is that it is not encumbered with any humanity.

Will a pandemic replace flying cars?

It has been a great book 30 years ago when I read it for the first time and it is even better now reading it with life experience. Since reading it for the first time I was hoping that internet and robotics would allow people to move apart and live wherever they like. It seems like we might be finally getting there now. Would cities really become obsolete one day?

City stands the w of time.

I was happy to rediscover this master piece

I read the story when I was in my teens. It was in a different language at the time. So happy to listen Simak's simple an wonderful words. I since have read other of his novels, I had forgotten that the author was obsessed with the end of our civilization. probably because he went through the two world wars. City or (Demain les chiens) remains my favorite.