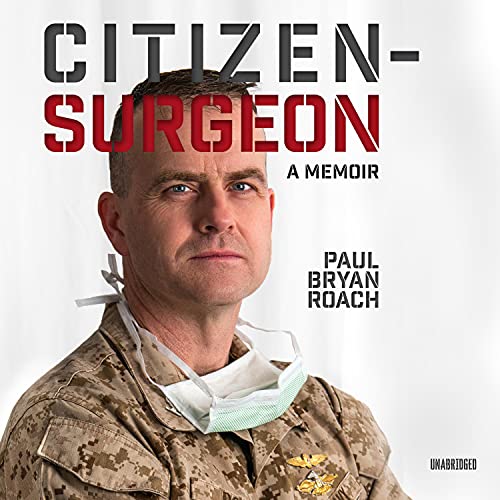 Citizen-Surgeon takes listeners into the otherwise inaccessible, remote, and intense world of life and surgery within a combat zone. In the backdrop of the US-led war in Afghanistan, amid a defining US Marine Corps’ offensive to conquer the Marjah region of Helmand Province, [then] US Navy Commander Paul Roach and his company-mates assemble and congeal as a medical unit in Southern California, transport from the United States to their tents in Dasht-e-Margo (the “Desert of Death”) in Helmand Province, Afghanistan, and professionally execute their role as one of the few medical and surgical companies supporting this major offensive.

In the course of the book’s events, the author undergoes a transformation from being a physician in a military uniform into a military officer that happens to be a physician. The crucible effecting this change is the military offensive and his role within it. Shocking and intense, an array of critical injuries and their treatments are described in rich language that anyone, medical or nonmedical alike, can absorb. Death also pervades the atmosphere; intrusive, unyielding, and painful, its battlefield familiarity and personal impact is resisted, suffered, and ultimately, accepted.

Citizen-Surgeon is an intimate portrayal; a chronicle; a celebration of friendship, love, success, and failure; contemporary war; and military medicine. It is an account of a slice of reality that few people are privileged to know. It reflects deeply upon the nature of personal choice and how that choice puts us where we are in life, even if we did not fully see in advance how the choice would change us. Citizen-Surgeon also explores a variant of post-traumatic stress particular to medical assets, and it reveals one man’s chess match against it. It is a must-listen for those with a specific interest in contemporary military medicine, and for those with broader, essentially human interests in individual growth, adventure, and self-actualization.

What listeners say about Citizen-Surgeon

I’ve read a lot more about prior conflicts than I have about our wars in the Mid-East, but something about this one drew me in and I’m damned glad that it did. The story is compelling, the author/narrator hit the right combination of detail and emotion and pain. It was all in all a fantastic read that I am recommending to everyone.

I loved the book! Although I wasn’t in the service I have a connection being a military mom, former trauma nurse and serving our veterans in a VA. The personal accounts both of the medical cases and raw emotions associated with war and being in the service sure made me appreciate all our service men and women do for our freedoms. Paul has an easy to listen to and “real” voice making for a good audio. Highly recommend - gain some perspective on wartime surgeons beyond that of M.A.S.H.!

sobering account of a army surgeon, excellent story and very emotional, war is he'll and not all it's made out to be

Ironical in the extreme now

A clear painful and tragic firsthand account which describes in detail the paradoxical situations of doctors trying to save the lives of Americans,Afghans civilians,services personnel and most tragically of all innocent children; and members of the Taliban few of them grateful but many who would kill the medical staff with their last functional limb given the slightest opportunity . Considering the situation in that country now the feelings it can arouse can be unbearable so beware if