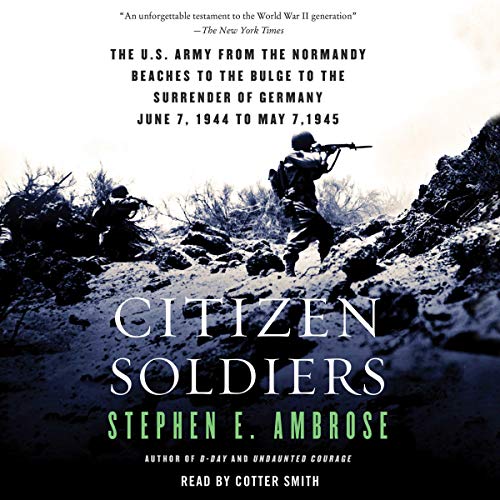 A masterful biography of the U.S. Army in the European Theater of Operations, Citizen Soldiers provides a compelling account of the extraordinary stories of ordinary men in their fight for democracy. The story opens on June 7, 1944, on the beaches of Normandy and ends at the end of the war on May 7, 1945.

Along the way, Ambrose draws on hundreds of interviews and oral histories to recreate the experience of the individuals who fought in the battle, from the high command - Eisenhower, Bradley, and Patton - on down to the enlisted men. Plus, the author reveals the learning process of a great army, from how to cross rivers, fight in snow, hedgerows, and cities, and coordinate air and ground campaigns, to the intricacies of fighting in winter and on the defensive. But most incredibly, Ambrose tells the story of how ordinary citizens became soldiers in the greatest army in the world.

"What a wonderful book, an emotionally powerful argument for our wonderful, flawed system, and its home-grown heroics. Ambrose's pen is a machine gun: detached, hot, and devastating." (Ken Burns)

What listeners say about Citizen Soldiers

This is every bit as good as Band of Brothers. My only regret on this one is that it is abridged. This is one of my favorite books on war -- very well written and very well narrated, with fascinating stories to tell.

Wait For the Unabridged Version

This book suffers quite a bit because of the abridgement. You move from a battle scene in the forest to a street fight in the town with no transition or explanation. I was able to follow some of it, but my wife was constantly stopping the book to ask what was being discussed. My daughter has read the unabridged book, and she says it is very good.

The book was ok. Not like other ambrose books I have read. It seamed to be choppy and bounced around like Flags of our Fathers. Not bad but not his best.

This is such a vivid description of what war was like in World War II. I’ve listen to several military books over the years and I can’t express enough how important the narrator is. Cotter Smith it brings you into each scene with his perfect delivery.
Stephen Ambrose is truly one of the great authors of our generation. I wish you were still here to tell us more stories of the greatest generation

A rare look at WWII Europe from the soldier's view

I'm not a WWII military authority, but this is one book I could not drop. The audible was great, getting the right French and German pronounciations; having to hear ALL the story, and not just the part I didn't skim. Its personal nature - specific stories of soldiers - makes one feel apart of the fears, horrors, and hardships they lived with and died with. Its a long audible - about 6 hours - but worth it!! If your into reading WWI and WWII history and related stories this book is a must!!