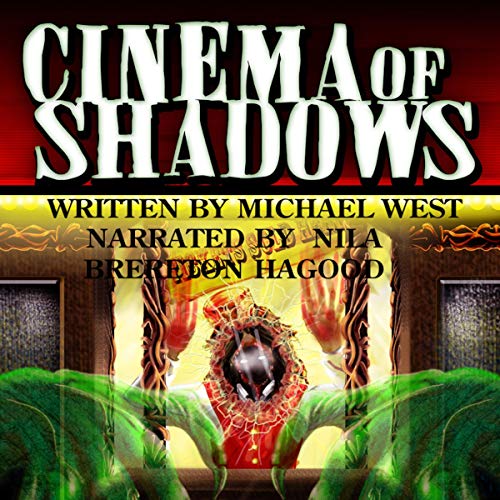 Welcome to the Woodfield Movie Palace. The night the Titanic sank, it opened for business...and its builder died in his chair. In the 1950s, there was a fire; a balcony full of people burned to death. And years later, when it became the scene of one of Harmony, Indiana's most notorious murders, it closed for good. Abandoned, sealed, locked up tight...until now. Tonight, Professor Geoffrey Burke and his Parapsychology students have come to the Woodfield in search of evidence, hoping to find irrefutable proof of a haunting. Instead, they will discover that, in this theater, the terrors are not confined to the screen.

Cinema of Shadows is one of the growing Harmony, Indiana collection of horror tales from Michael West that also includes Spook House, Goodnight, For the River is Wide and the Gods are Hungry, and The Wide Game.

What listeners say about Cinema of Shadows

A Solid, Edge of Your Seat Slice of Macabre

West's story feels like an homage to 80s horror with a more modern twist, utilizing the paranormal investigation craze to organically send our protagonists into harm's way. The characters themselves could fall into cliches if not for the added character depth the author skillfully stitches into their more personal moments. The climax is a sinister mix of danger, hellish imagery and heart stopping action.

The narration is performed with obvious experience by a skilled actress, however, her tonality and portrayal is mismatched to their source material. This causes more intense moments to fall short of their potential scares and intrigue. When dialogue is read the voice portrayals often sound like caricatures and stereotypes and some of the accents can be a bit uneven. Again, this narrator is very talented but is not the best fit for West's more mature work or horror beyond the YA genre.

I am probably more in the range of 3.5 stars for this book. I would describe it as watching a B-movie - the one where the effects are just not quite right and the dialogue is very cheesy at times but it's a decent show nonetheless. The abilities and the boundaries of the spirits are not explained so there are spirits who have the ability to speak coherently - carry on conversations; have self-awareness; and have empathy for others. For me, the story seemed to drag a bit - I think the story would have been better served if the characters got to the point of the premise - investigating the theater.

This was very good.I enjoyed it! Kim is part of a class on parapsychology...I think.The teacher wants people who have had unexplained events in their lives.They get more than they sign up for! Nila Brereton Hagood was a fine narrator. I was given this free review copy audiobook at my request and have voluntarily left this review.'

I learned a lot about paranormal investigation in this story, with characters explaining different techniques and tips for ghosthunting - I thought that was pretty interesting. There was a lot of gore at various points along the way, and especially during the final part of the book, that was vividly described and reminiscent of B-horror movies.

The cast of characters were likeable, although I felt like the romance sub-plot between two of the main characters was an unnecessary distraction and seemed to happen at warp speed. Rather, I can understand that the romance sub-plot was important as a mechanism to move bodies to specific places during specific times in the story, but I think there was too much focus on the romance (for example, The final chapter (pre-epilogue) could perhaps have been shortened or omitted altogether; it seemed to incongruous, to wrap up the main story by dwelling on the romance sub-plot when all of the remaining main characters have just recently experienced the most traumatic event in their lives. Instead, I would have rather have learned more of the background of the weird happenings in the town, or more about the two new characters that suddenly appeared towards the end of the book. Having said that, these aren't major complaints.

The main reason why I gave this audiobook 3.5 stars overall is because of the narration. Many other reviewers felt that the narration was great, so I'm one of the minority reviewers who didn't feel like this narrator "fit" the story. She changed her voice for some characters' dialogues, but not others, and I didn't enjoy the accent that she used for the black female character. If I were listening to this narration for a children's book, I would have given a higher performance rating. But for a gory horror story, I found that the narrator detracted rather than enhanced the overall horror experience for me. As mentioned, most of the other reviewers here had very different opinions of the narrator than I did, so take my review with a grain of salt. (I'd definitely read more from this author in the future and I'd listen to this narrator again in the future, but I'm not sure that I'd listen to this particular author/narrator combination again.)

This is a great story about ghosts and parapsychology. A group of students avoiding normal psych classes for their general ed requirements find themselves ghost hunting at a famous 'haunted' movie theater. Along the way you learn about the different students and how they found themselves there. Then the chills get cranked to 11 and all you can do is sit back and enjoy.

I really enjoyed this narration of this story and would love an opportunity to return to small town haunted Indiana. I received the audiobook code for this at my request and have voluntarily left this honest review.

Fun, and hard to put down!

I can't wait to go back to Harmony, Indiana!

Cinema of Shadows is a suspenseful ride from start to finish. The characters are relatable, and the story has you captivated throughout. The setting of the story was absolutely perfect for the ghoul packed trip through small town Indiana. Very excited to get my hands on more of Mr. West's work!

Full of thrills and chills. One of the best horror audibles I've listened to this year!

The narration was perfect!

I received a copy of this audible free at my request. I'm thrilled to be able to leave my review.

An entertaining B-movie vibe going on

This one had a real cheesy B-movie vibe going on. I liked that about it. It was a little heavy on the cheese in parts, but a quick and entertaining read nonetheless. The narration added another layer to the story and was done very well.

*I received a complimentary copy of the audiobook of this one and am leaving this voluntary honest review.

I really enjoyed this, I started with book 3 (Spook House) which I loved and then I bought this one, as I'd enjoyed Spook House so much, and this did not disappoint me at all. It is hilarious at times, terrifying at others, but more importantly, it was fun all the way through and I love Nila's narration.

My biggest concern for 2020 is when will 'The Wide Game' (book 1) be released as I'm on tenterhooks waiting for it ...

Conclusion : Buy this if you love old school horror, I think you will love it too.

This was very good.I enjoyed it! Kim is part of a class on parapsychology...I think.The teacher wants people who have had unexplained events in their lives.They get more than they sign up for! Nila Brereton Hagood was a fine narrator. I was given this free review copy audiobook at my request and have voluntarily left this review.'

This was a fun read, and took me right back to when I first started reading horror (mainly Stephen King and Christoper Pike) as a child. I liked the writing, it has a very 70s feel to it, though it is set present day for the most part.
Creepy and very much a slow burner, which is how I like my horror (modern horror just doesn't cut it for me - too much unnecessary gore for the sake of it and not enough build up or characterisation).
From a narration point, it felt like it took a little while for Hagood to really get into the swing of it, but she does a good job bringing this book to life. I think this would make a decent adaptation to the screen as well.

I was given this free review copy audiobook at my request via Audioboom and have voluntarily left this review.