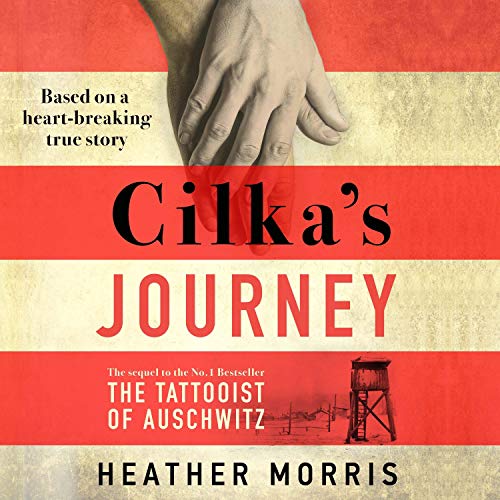 The sequel to the international number one best seller The Tattooist of Auschwitz, based on a true story of love and resilience.

Her beauty saved her life - and condemned her.

Cilka was only 16 years old when she was taken to Auschwitz-Birkenau Concentration Camp, in 1942. The Commandant at Birkenau, Schwarzhuber, noticed her long beautiful hair, and forced her separation from the other women prisoners.

Cilka did what she had to in order to survive Auschwitz. And yet after Russian soldiers liberated Auschwitz in 1945, Cilka was charged as a collaborator and sentenced to serve a 15-year sentence for 'sleeping with the enemy'. Once again, she found herself on a brutal train journey, crammed into a carriage with many desperate women and children. This time, her destination was Siberia. She was by then only 18 years old.

So began a new life of horror and brutality in a prison camp close to the Arctic Circle. But in this unimaginable darkness, this terror beyond terror, Cilka found endless resources within herself, her profound humanity and determination helping her to survive against all odds.

Cilka's Journey is a remarkable novel of courage and resilience, based upon the heartbreaking true story of Cilka Klein.

"She was the bravest person I ever met." (Lale Sokolov, The Tattooist of Auschwitz)

Brave, compelling, spellbinding, and outstanding work! Thank you for all of your efforts Heather.

Didn't mind this book. I really was very interested in what had happened to Cilka but part of the story felt a bit repetitive within this book and overlapping with The Tattooist. It did seem a bit contrived in terms of Cilka's 'luck' and unfortunately something about the reader's voice grated on me at times. Whilst I enjoyed the storyline, my favourite parts were at the end because I found the history, research and planning behind the novel very interesting.

This is a book for women mainly. Just like the “Tattooist” which is fabulous, it encompasses attachments to that book. Well written and spoken, it’s a window into the human filth of the past. Craig Berry 2019

I couldn’t stop listening! A very well written tale shedding even more light on our history.

A tale of epic proportions

This book was so touching. I almost felt as though I was there. The moments between mother and daughter bought me to tears. The resilience of Cilka is awe inspiring. I truly wanted her to find happiness.

Really enjoyed this very real story, of course hard to get your head around the world to what it was back then, heartbreaking of course. Highly recommend this book

I loved this story. It was told in such a way you really felt the pain and misery of the characters. Very well researched and written. A story everyone should know about.

This is a beautiful powerful story about the ongoing hardships of Cilka’s time in the Gulag and referenced The Tatooist of Auschwitz to lend understanding to Cilka’s feelings though Cilka’s Journey could be read independently.

The narrator handled the story beautifully.

This book was most heart warming and well worth a read. Found it touching and the determination of the people who survived and what they endured It brought tears to by eyes in places. Beautifully narrated A must read

Thank you Heather for writing this story. Thank you for the narrative of Cilka’s life and thank you for the hours of research that went into investigating what truly went on in those terrible camps.

This narrative is captivating and insightful. I couldn’t put it down and found my mind wandering back to Cilka’s story whenever it could.

I loved this follow up story of Cilla as I had wondered what might have happened to her. Although it is harrowing and desperately sad, it is also one of triumph and survival. The reader is perfect for this book. Highly recommend

The Incredible Cruelty of Being

I found it hard to see how there could be a sequel to 'The Tattooist . . .' given how that story completed but in Cilka Heather Morris has found a very worthy character from the original book to take it on further. It's an incredibly cruel tale, the sheer inhumanity of the times is starkly described. The utter cruelty of the Nazi regime, the sheer spiteful vindictiveness of their Russian conquerors who proved just as thoroughly oppressive and on top of all that even cruelty between those oppressed as they struggled to survive forms the backdrop of Cilka's story.

But, in the midst of all that blackness and despair, just as in the first book, there is the most amazing nobility among those who have nothing. Morris explains quite carefully at the start that this is more of a work of fiction than the first book although it is based on a real story. And if this book has any weakness it's found within that fiction as the lead comes across as just a little bit too perfect and selfless. That is really just a quibble though as the story has beauty, it has beasts but most of all it has heart when people rise up from their oppression and show such great character.

It's near-impossible for most of us to really understand just how desperate and crushingly awful life must have been for the Cilka's of those times but she demonstrates the best of humanity while surrounded by the worst our race has to offer. That alone makes this story genuinely uplifting!

I enjoyed this book and the story of Cilka but this narration just didn’t work with me.
When listening to the Tattooist of Auschwitz, I was kept very much engaged and entertained with the accent changes of Richard Armitage , and I guess I was expecting more of the same from this book.

More than a sequel...another journey

To say I was disappointed is an understatement. I thought the Tatooist of Auschwitz was very well written, compassionate and thought provoking. This book was very poorly written, there was no depth or substance to it and I didn't feel it conveyed the horror of the life Cilka and others suffered at the prison. very bad choice of narrator. The two books could have been written by different authors. I will not be recommending it to anyone else.

A story of hope

After reading the tattooist of Auschwitz I was thrilled when I seen cilka journey was being realised’ I couldn’t stop listening. Before work’ before bed & in the car. She truly was an amazing woman to go through what she did & survive. After visiting Auschwitz and reading the books I still find it hard to accept that the holocaust is all fact & not fiction. Must read..


This book was beautifully written and combined part true story with fiction woven around it to make a remarkable listen.

Many chapters were very hard to comprehend, and left me feeling sick my stomach. What is almost unbelievable is that this happened less than 100 years ago.

Heather Morris has done extensive research to create this book and I am grateful to her for writing this incredible journeying a unique young woman.

Great book, a wonderful further insight after the Tattooist of Aushwitz. However, the later was read beautifully by Richard Armitage but this time round a different reader and was made to sound very simplistic. A great shame.

Wow. Well worth a listen. You really get to feel what it must of been like to been in the Russian prison system like she was.

Very moving story of injustices of mankind about one of the bravest women who was removed of her dignity abused and and subjected to the horrors of fascism and communism for thirteen years.

Equally as riveting as The Tatooist. Harsh at times, but very enjoyable. I couldn't wait to get back for the next chapters