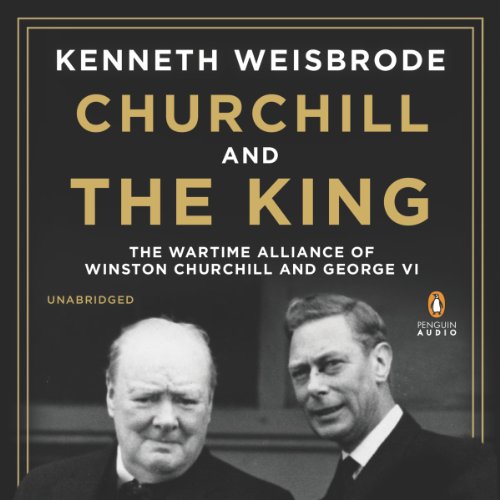 Churchill and the King

For fans of The King's Speech, the intriguing bond between monarch and prime minister and its crucial role during World War II. The political and personal relationship between King George VI and Winston Churchill during World War II is one that has been largely overlooked throughout history, yet the trust and loyalty these men shared helped Britain navigate its perhaps most trying time.

Despite their vast differences, the two men met weekly and found that their divergent virtues made them a powerful duo. The king's shy nature was offset by Churchill's willingness to cast himself as the nation's savior. Meanwhile, Churchill's complicated political past was given credibility by the king's embrace and counsel. Together as foils, confidants, conspirators, and comrades, the duo guided Britain through war while inspiring hope in the monarchy, Parliament, and the nation itself.

Audiobooks about these men as individuals could fill a library, but Kenneth Weisbrode's study of the unique bond between them is the first of its kind.

What listeners say about Churchill and the King

Superbly read but light on detail or revelation

The narrator of this audio book is first class, and whilst the subjects of the book would be well known to listeners, I didn't find much that I already had known nor was the book especially illuminating. Yet, it was an enjoyable audio book experience albeit underwhelming.

This interesting narration take much that is known of HM King George and Winston. As I listened, I recalled the close and continuing relationship between US Grant and Wm. Tecumseh Sherman during the War for the Union. Sherman was fully capable of carrying out independent actions in his theater of responsibility, but always worked in synchrony with Grant. The criticality of the king to the operational war effort is minimized, whilst Churchill's is given full credit. My opinion of the king is tempered with empathy because of the abdication of his brother and his ascencion to the throne at the worst possible juncture in history for a monarch who never wished to be king.

The book opens by stating that there are many books about Churchill and George VI, and promises to tell a yet untold story about how they worked together. Yet, there isn’t anything unique about this rehashing.
Much time is spent with pointless “what if,” throw away comments, which add to the word count, but not to the story.
Despite a true interest in the subjects, the book was unable to keep my interest even as I hope that the next line might deliver some spark of insight or new fragment of unknown detail.
Several instances of historical inaccuracies that I noted, left me questioning the author’s credibility.
I rarely leave negative reviews as people have different taste in books, but this simply is not a worthwhile listen. As the author points out, there are many other books about the King and MP, I suggest you listen to them.

Well worth every word. Completely took my mind off the treadmill. I goes beyond history. I highly recommend it. A +

A brilliant narrative about the personal lives of both Churchill and King George VI. Anyone who enjoys British history and the second world war should be advised to read this.