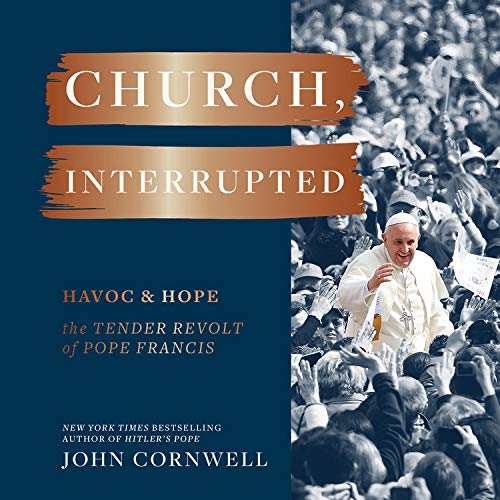 Church, Interrupted: Havoc & Hope: The Tender Revolt of Pope Francis is a revealing portrait of Pope Francis' hopeful yet controversial efforts to recreate the Catholic Church to become, once again, a welcoming place of empathy, love, and inclusiveness.

Best-selling author, Vanity Fair contributor, and papal biographer John Cornwell tells the gripping insider story of Pope Francis' bid to bring renewal and hope to a crisis-plagued Church and the world at large.

Cornwell argues that despite fierce opposition from traditionalist clergy and right-wing media, the pope has radically widened Catholic moral priorities, calling for mercy and compassion over rigid dogmatism. Francis, according to Cornwell, has transformed the Vatican from being a top-down centralized authority to being a spiritual service for a global church. He has welcomed the rejected, abused, and disheartened; reached out to people of other faiths and those of none; and proved a providential spiritual leader for future generations.

• Well researched and brilliant, listeners, scholars, and fans of John Cornwell will want to listen to his most controversial and compelling work yet.

• More than a third of America's 74 million Catholics said they were contemplating departure in 2018. It is estimated that over the past 20 years, the Catholic Church has been losing two-and-a-half billion dollars annually in revenues, legal fees, and damages due to clerical abuse cases. The decline in church attendance, marriages, and vocations to the priesthood and sisterhood tell a story of major decline and disillusion. Cornwell showcases Pope Francis' way forward, a hopeful message that gives reinvigorated reasons to stay with the church and help be the change the new generation would like to see.

• For listeners within and outside Catholicism fascinated by the future and restructuring of the church, this will be a book they want to listen to again and again as the church continues to change and grow.

What listeners say about Church, Interrupted