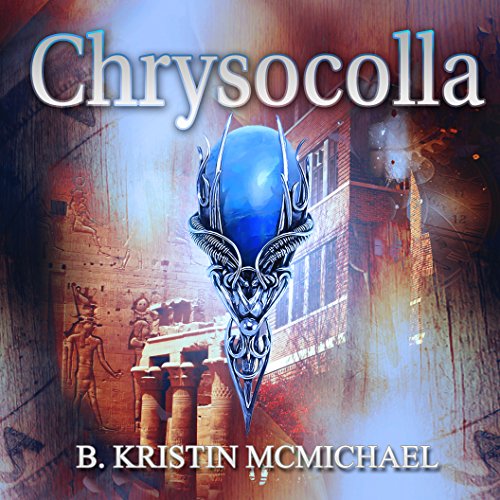 By: B. Kristin McMichael
Narrated by: Hollie Jackson
Free with 30-day trial

Mari's past and present are not set in stone. Everything keeps changing, and try as she might, her future isn't what it's meant to be. At least not yet. Logan has not given up hope of winning her over, and Seth refuses to let him win. Mari must make choices and fight for the future she wants, but that is easier said than done. Every time she feels they have made the right choice, another problem arises. Can Mari outlast Logan? Can Mari find a way to make sure her future is the one she wants?

What listeners say about Chrysocolla

The first book drew me in and I was HOOKED!! I only wish there was an epilog that told what happened to Seth and Mari.

Loved this series and am sorry to see it end. It is a clean book that l can recommend to young adults through to adventurous mature readers. Time travel done well.
loved the narration.

Perfect ending for this fabulous series.

Logan is determined to keep Mari for himself even though Mari and Seth are to be wed. Mari, Seth and Kai follow Logan through centuries and countries to try to save lives and stop his evil shenanigans.

The author has created another great series. I was enthralled from the first chapter. I love the unpreditable twists that keep the reader guessing.

love the writing and all the books in the series. very good story line. will read more of her books

Previously on Aventurine, book 3... Mari and Ky escape to the past from Logan and into the arms of Mari's father. What an ending right?! That whole entire story was Logan tricking Mari into reconnecting with him, and trapping her, essentially making her his prisoner. All the while his own son, Ky, is trying to help her find a way out and correct the changes Logan made repeatedly to the past. Will they be able to learn how to correct what Logan has done and stop him once and for all? It's the million dollar question!

Oh my bleeping Goddess! This book took a full 180 from the previous one, and landed a standing ovation! The back and forth, twists and turns with the past present and future, had me second guessing what the hell was going on the entire time! It finally dawned on me what this reminded me of, that movie with Ashton Kutcher, The Butterfly Effect! Every time Mari didn't end up staying with him, Logan would go back in the past and change something to try and force the outcome into his favor. Psycho much? Despite the fact that this evil little bastard knew Mari was in love with and destined to be with Seth, he still tried, like the little engine that could... it was sad, and pathetic.

I loved the fact that once Mari was back in the past she was reunited with her mother, and father (the one she never met and didn't even know who he was!), Seth, Ty, and Dee, yay! Together they were a force to be reckoned with. Ky was also with them, since once he chose Mari's side he couldn't be caught by Logan. Now that all the players are in position, the story adds a twist, with a dash of danger that I was not expecting. I love how it all came together in such an adrenaline rush, and ended just the right way. I'm sad to see the end, but happy about how it did. This series is a definite must read for all YA Fantasy book lovers!

Narrator Review
Hollie Jackson narrates the last installment to this epic fantasy! I loved Hollie from Carnelian, Book 1 of the Chalcedony Chronicles. She is a really talented narrator, and I hope to hear from her again very soon!

*Audiobook provided by the author for an honest review*

this was a great Ending to the Series!! I'm happy the narrator was with the series from start to Finish! Hollie did a good job!! B. Kristin McMichael always does a good job!