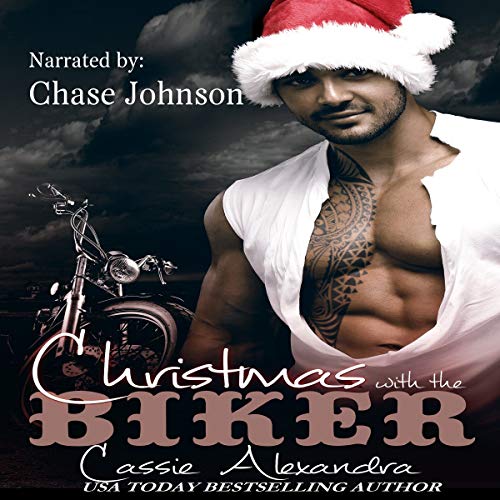 From USA Today best-selling author of The Biker Series comes a sexy, holiday story to get your motor revving.

Meet Dodger, the newest prospect of the Gold Vipers... and long, lost half-brother to Raptor and Jordan Steele (The Judge).

Cocky and arrogant, just like his siblings, he doesn't much like doing the grunt work expected out of him, but willing to do what it takes to prove his worthiness to the club. Even during Christmas, which isn't exactly his favorite time of the year. Amused by his Scrooginess, Raptor puts him in charge of collecting holiday donations and dressing up as Santa Claus for several biker events, which doesn't exactly thrill Dodger.

Chloe Wilson loves the holidays and happily volunteers to help the Gold Vipers collect toys and raise money for the homeless. Until, that is, she is thrown together with Dodger, the grumpy biker who has about as much Christmas spirit as a deflated football. The two clash, at first, but then holiday magic catches up with them when they get trapped in a horrible blizzard together.

No cheating and HEA.

**This book is intended for listeners 18 years old or older due to the explicit language, sexual situations, and violence that may be upsetting to some listeners. This is a work of fiction and is not meant to be a true depiction of a motorcycle club. It was written for entertainment only.

Christmas With The biker

This was a fun to read story. It started out a bit rough and seemed childish, but stick with it and it will be romantic!

I enjoyed Graham Dodge and Chloe wilson's story. It starts on Christmas Eve and goes through just after Christmas before skipping to almost a year later. I appreciated the beginning giving insight as to why Christmas isn't exactly Graham's favorite time of year and how he and Chloe met. That being said, the book's description makes Graham sound a lot more Scroogier than he actually comes across. At the very beginning, he loves Christmas. Then his ex put a serious damper on it. That being said, I don't think he could exactly be described as a Scrooge in the latter part of the book. Sure, Christmas isn't his favorite time of year and he isn't thrilled about his assignment to be Santa, but he takes it in stride and falls into the roll easily, right down to the ho ho ho's.

The book often features a lot of sexual tension between Graham and Chloe, but contains only a couple of explicit scenes near the end (only one ending in actual sex).

I found Tank's penchant for drama entertaining. While he doesn't play a huge role in the book, he does intentionally throw Graham and Chloe together repeatedly after learning of their make-out session at the fundraiser just after Christmas last year. He does his darnedest to make sure the two end up together.

I really enjoyed listening to Chase Johnson's voice in the Audible version of this book. I tend to prefer male narrators in general. I thought he did a good job with the women's voices. The one downfall to his narration, though, was that it was difficult to keep up with whose chapter we were in (Graham's or Chloe's) with his narration. I'm not sure if I can put a finger on exactly what the problem was other than that his narration was in the same voice across the board. It may have helped if he changed his voice slightly when narrating Chloe's chapters, just to make it clear whose point of view the reader is currently hearing.

One last thing that has nothing to do with the story itself, but how the audio copy turned out: on many occasions the book kind of hiccuped. The book would pause briefly, and then repeat the last couple of words spoken before continuing. For example (this is not a line from the book), "Graham looked at...looked at Chloe and smiled." It was irritating.