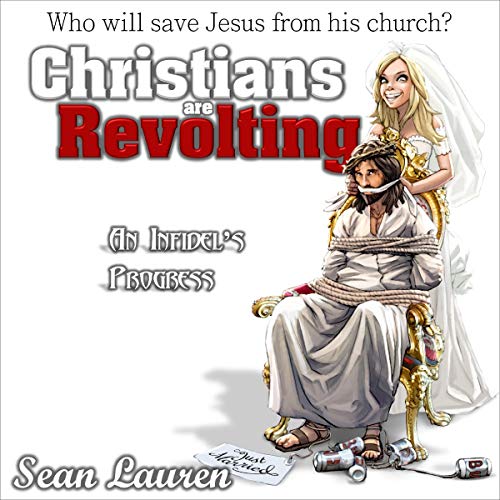 Christians Are Revolting: An Infidel's Progress is the story of an unremarkable young man and his thirst for truth. Charming, witty, and bright, you will wonder where these characteristics appear as the author recounts his unique experiences in the drudgery of radical faith.

Over a decade of literally crying out to God for understanding, he came to conclude that Christians were revolting against the teachings of Jesus and had resurrected a brain-devouring zombie to serve, instead. Surprised at how such an obvious fact could be overlooked, he took to destroying his own life and upsetting the Christian masses in hopes of convincing the inconvincible of something so logical.

In truth, Christians likely know that their faith has gone astray (hence the plethora of denominations), but fear and apathy grips their minds and blinds them from asking all the right questions. The author stood up to that fear in full faith that a good God would not despise - and would even applaud - questioning what man told him was holy. Such openness enabled him to see that Christianity had indeed reverted to the vile and sinister ways of the Pharisees that Jesus once sought to destroy.

The kingdom of God that Jesus preached has been entirely puffed up and its salt has long since lost its savor just as Jesus predicted. Christians Are Revolting is a must-listen for Christians and a message of love and peace that humanists of any faith (or lack thereof) can enjoy or recommend.

What listeners say about Christians Are Revolting