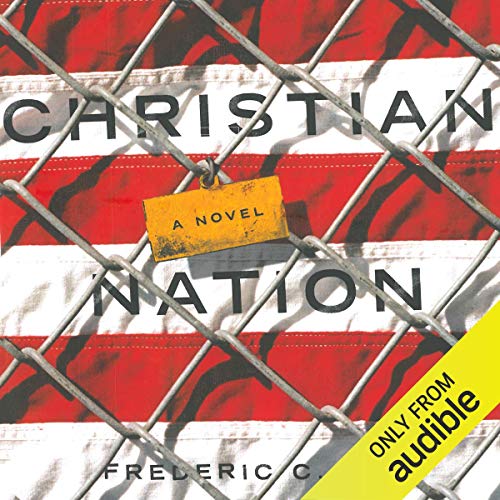 So ends the first chapter of this brilliantly listenable counterfactual novel, reminding us that America’s Christian fundamentalists have been consistently clear about their vision for a "Christian Nation" and dead serious about acquiring the political power to achieve it. When President McCain dies and Sarah Palin becomes president, the listener, along with the nation, stumbles down a terrifyingly credible path toward theocracy, realizing too late that the Christian right meant precisely what it said.

In the spirit of Philip Roth’s The Plot Against America, one of America’s foremost lawyers lays out in chilling detail what such a future might look like: Constitutional protections dismantled; all aspects of life dominated by an authoritarian law called “The Blessing,” enforced by a totally integrated digital world known as the "Purity Web." Listeners will find themselves haunted by the questions the narrator struggles to answer in this fictional memoir: "What happened, why did it happen, and how could it have happened?"

You will either love or hate this book

If you love this book - you will also be very scared. I guess if you hate this book you would be hopeful that it's story might come to pass.

MUST read! Perfect balance to 299 Days!

CHALLENGE TO CHRISTIANS: I am a Christian, but also a strong Constitutionalist. Our laws matter, and the Constitutional Republic is the way that our laws protect the minority views against mob rule. Every single time in this book that you find yourself silently cheering for the way that Christianity finally quashes evil, I want you to mentally reverse the entire story and put Islam in Christianity's place. THAT'S the danger of a theocracy. Now take it to real life. Every bill we pass giving preferential treatment to OUR religion (prayer, 10 Commandments, etc) systematically destroys the very thing that had kept us free to worship as we like without persecution. Those laws can easily be flipped in the next administration to outlaw the very religion you revel in it protecting. As an American, please remember that.

This is a perfect balance to the 299 Days series. As in, two sides of the exact same coin. In 299 Days, America's freedoms are lost to a liberal agenda. In Christian Nation, it falls to a conservative one. In both novels, the enemy is NOT the right or the left. It is COMPLACENCY and an apathetic view toward our Constitutional Republic. This is a smart, researched, well thought out and well-written story that deserves some thought. Every American should include this book in their Orwellian collection, and truly take it to heart.

This was an incredibly good book. All of it seemed so plausible. In fact, at one point while I was listening to it, my wife (who had only heard a few minutes of it) asked me if it was fiction or non-fiction. This is one of those books that some people will hate and others will love, so listen to it with an open mind. You'll find it an engrossing tale of where we could be headed as a country, or perhaps a cautionary one.

This was the first book in as long as I can remember that I have not actually been able to finish. Just read George Orwell's 1984 and be done with it. At least Orwell wrote with a touch of subtlety and art in the message. The dogmatic spoon-feeding of Christian Nation is just too much to stand for the length of the book. After all, this is supposed to be a novel, not a blog post.

Please note, I do not disagree with the point of view from which the book is written, only the method of delivery.

Nightmare fiction too close to reality.

This book starts with McCain and Palin winning against Obama, then takes the fiction forward to examine how evangelical Christians would then have set about taking over the US. It is the most chilling book I've read in a long time, a total horror story of persecution and oppression of women and homosexuals.

Of course, under Trump the work of the born-agains to turn the country rightwards is taking place and it's very much reflected in this novel. Turning the Supreme Court to an ultra-conservative majority - as with the appointment of Kavanaugh - is a necessary step towards ending abortion and LGBT rights. Too much of this book rings true and present. Too much of this book is happening right now. Jesus redefined as the commanding figurehead for a violent army, taking away rights and freedoms for the glory of God.

This is a book that can give you nightmares but you will be woken up to reality by this fiction. I recommend it. I certainly think any Americans opposed to the modern hardline Republican agenda should read it.

Thought provoking.. And a little scary

Thought provoking and worrying given the current climate in the states, hopefully not a premonition of things to come given current political climes.
Well read, and we'll written

Interesting concept, but should have been shorter

The basic idea behind the story is very interesting, and well executed.
But except for a few moments, I just didn't care for characters.