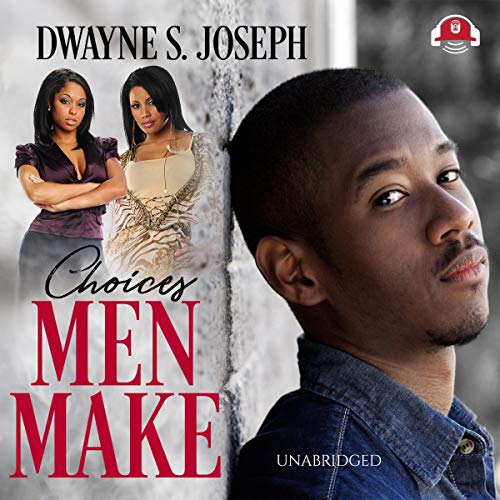 Have you ever wondered about the choices men make and why they make them?

Julie Reed wondered when Vic - her husband of six months - walked out on her for no apparent reason. Now he's happily in the arms of another woman.

For Colin Ray, choosing a new woman is like going to the grocery store. It's just something you have to do every week. That is until he runs into Emily. She isn't his type at all...but sometimes you can't control the choices men make.

.....All women do not possess characteristics portrayed in this author’s book....The only people in this book that had ANY sense at all were Roy & Vic.....every other character in this book and their crazy juvenile behavior were figments of the author’s imagination! These characters and their simplistic elementary behavior was absolutely ridiculous. Being adults, these characters weren't developed at all.

Excellent read! The book is more then what u think it is! Check it out yourself! 5 ⭐️⭐️⭐️⭐️⭐️ Stars! IJS RealtalkHelene!

I enjoyed Choices Men Make. It was very entertaining with a few plot twists thrown in for good measure. I sped through this recording, eager to see how the main characters were going to successfully resolve their love life dilemmas.

The narrator was Hilarious to me although There was serious matters. He kept my attention with his impression. Good Book Good Read... and entertaining 😅

A Mix of Surprise and Love 💘

This story had so many twists and turns I had to hang on to my seat! Not to mention that I laughed so much and so hard at the narrators voice of Vic's ex-wife 🤣!!! I was so weak!!! I was so glad she got her @ss beat!!! The surprise was the breakup 💔 of the marriage that I thought was the strongest out of all the couples!! Who knows what bones people have lingering in their closets!?!

Used my monthly Audible credit on another book that was mediocre at best, so started searching for one of the ‘included’ audibles when I came across this title. The summary was intriguing so I figured what the hell.

The reader has that raspy voice that makes it sound like he gargles gravel every morning which is great for the male characters, but takes imagination and some getting used to for the female characters, but all in all he did a good job. That with a decent storyline made for several entertaining hours of storytelling. Interesting make perspective even if it is fictionalization!

it was refreshing to hear the baritones of Ellis however it was difficult bc he didn't veer at all in infliction distinction none that. if we the listeners wanted a whole range we would be sadly let down bc although Ellis gave name he lacked division and all it was one note. Collin sounded like Roy who sounded like Latrice Stacy Emily and Julie. Ellis a lil voice acting would he wonderful bc you got a voice I wanna hear...more of.

Good but I disagree with the ending

This book was entertaining. However, exception to African American literature that gives different narratives for men and women. How is it fair for Victor emotions to be validated by his friends and Stacy emotions make her a villain and it’s the same premise. This kind of narrative has to stop we should stop reenforcing that men are free to make their choices without consequences while women must be tied down to the role of wife to be happy even when it’s clear happiness is unattainable.

I love any book narrated by Ellis

This was a really good book. I particularly enjoyed that it was by my favorite narrator, Mr. Ellis Park. I enjoyed the diversity of the story and how no just one person of either color had been deemed the villain and in the end everyone came together for nothing more than love. There were no derogatory remarks and no extreme violence. I’m looking forward to the next edition.