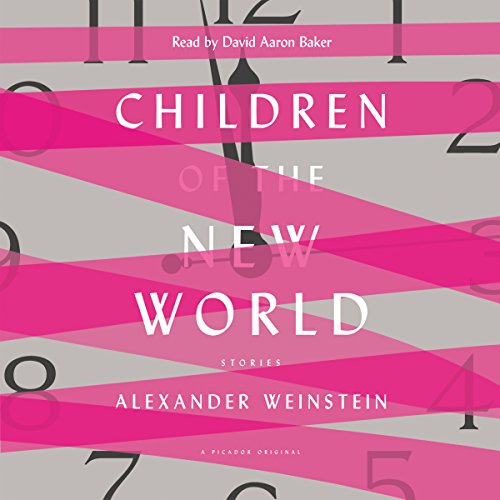 Children of the New World

An extraordinarily resonant and prophetic collection of speculative short fiction for our tech-savvy era by debut author Alexander Weinstein.

Children of the New World introduces listeners to a near-future world of social media implants, memory manufacturers, dangerously immersive virtual reality games, and alarmingly intuitive robots. Many of these characters live in a utopian future of instant connection and technological gratification that belies an unbridgeable human distance while others inhabit a postcollapse landscape made primitive by disaster, which they must work to rebuild, as we once did millennia ago.

In "The Cartographers", the main character works for a company that creates and sells virtual memories while struggling to maintain a real-world relationship sabotaged by an addiction to his own creations. In "Saying Goodbye to Yang", the robotic brother of an adopted Chinese child malfunctions, and only in his absence does the family realize how real a son he has become.

Children of the New World grapples with our unease in this modern world and how our ever-growing dependence on new technologies has changed the shape of our society. Alexander Weinstein is a visionary new voice in speculative fiction for all of us who are fascinated by and terrified of what we might find on the horizon.

What listeners say about Children of the New World

This was a fantastic read. Yes, it reminds of Black Mirror and I will add it has similarities to George Saunders both in themes and tone. People that enjoyed this book should check out his volume of short stories, In Persuasion Nation would be a great follow up read.

Children of the New World containers several near future and one alternative history along with studies of emotional consequence. The writing is beautifully couched in plain dialect. It could easily have been a beach novel (not taking into discussion the 2020 Covid debacle we are living through) sold at Walmarts.

One listener lamented the lack of traditional character structures. And he’s right...if you review with traditional narratives some of the characters are lightly developed. But the story’s are very developed and for the most part characters serve the story’s characters are part of the pastiche. The concept is king here. Things happen to characters but - oh how I hate the phrase I’m about to use - the world building is more important. What I appreciate about Alexander Weinstein’s writing is how spare it is but how he manages to mix humor, pathos, and the human condition into stories that can range from thought provoking to heartbreaking.

I loved Black Mirror, and yes, these short stories are a lot like that. I was entertained by the stories, and some were better than others (all were good, some were great). You have to realize that short stories are not like novels and cannot be judged the same. They are intended to be short and to provoke thought, which these successfully did. The author clearly understands human nature and did a good job using an understanding of our nature and behavior to imagine how we will act in various potential future scenarios. I enjoyed being surprised at how awful some of our modern behaviors are when viewed through a slightly different lens. For example, our society is clearly obsessed with rear ends, and one story shows how ridiculous the obsession is in a clever way. Also, we think we know people by just looking at limited social media profiles, and that modern trend is explored in another story. I usually listen to thrillers and true crime, and I thoroughly enjoyed this change of pace.

Out of all of the stories available, there was only one I didn't like very much. All the others were fantastic. This book was recommended as I searched for books "like Black Mirror" from Netflix. I have to say that this recommendation was perfect!

The male voice gave me a very visual representation of what he looked like, though I'm certain I'm wrong, but I couldn't help but think of every character looking the same, even with him changing his voice for different characters. That's my only real complaint.

if you're a fan of Black Mirror, or Electric Dreams from Amazon Prime, I highly suggest this book. The science fiction is just far enough away that it doesn't seem too impossible, and familiar enough to realize it might happen.

If you are a fan of Black Mirror, then you will love this collection. Each story is very different yet thought provoking.