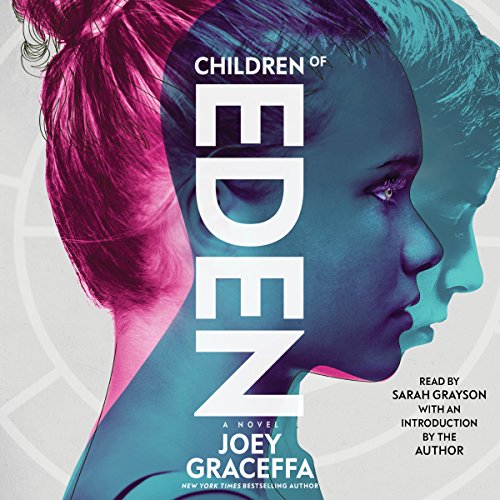 Twenty-five-year-old Joey Graceffa has captured the hearts of more than 8.3 million teens and young adults through his playful, sweet, and inspirational YouTube presence. Already a best-selling author with his memoir, In Real Life, Joey now presents his first novel, Children of Eden.

Rowan is a Second Child in a world where population control measures make her an outlaw marked for death. She can never go to school, make friends, or get the eye implants that will mark her as a true member of Eden. Her kaleidoscope eyes will give her away to the ruthless Center government.

Outside of Eden, Earth is poisoned and dead. All animals and most plants have been destroyed by a man-made catastrophe. Long ago the brilliant scientist Aaron al Baz saved a pocket of civilization by designing the EcoPanopticon, a massive computer program that hijacked all global technology and put it to use preserving the last vestiges of mankind. Humans will wait for thousands of years in Eden until the EcoPan heals the world.

As an illegal Second Child, Rowan has been hidden away in her family's compound for 16 years. Now, restless and desperate to see the world, she recklessly escapes for what she swears will be only one night of adventure. Though she finds an exotic world and even a friend, the night leads to tragedy. Soon Rowan becomes a renegade on the run - unleashing a chain of events that could change the world of Eden forever.

What listeners say about Children of Eden

This book was amazing, it was unpredictable with lots of twists.
The end of the book left me with so many questions and feeling like there must be a 2nd. I so hope that get to make a movie out of this
The story was amazing
How the reader invites you in to the story really had me not want to leave and it was overall amazing and brilliant

Eden is a good book. It's not completely original and it uses almost all of the common cliche plot devices found in every other young adult novel, but very rarely to its detriment. It's a fun ride, it's well read, and honestly it gives a lot higher quality than I expected from a novice novelist.

I find the author constantly tries, and fails to push his inappropriate and incorrect views even though this book seems to be written for a younger reader.
Also the narration is over emphasised and annoying.

I didn't really have any expectations when I started this book but I absolutely loved it. I love Rowan and all the characters. One of very few young adult books I've read where the love story/s don't seem cheesy. It was adventure-packed from start to finish and not predictable for a second. I'm downloading the second book immediately. Narrator was excellent as well.

I loved this book. I felt like I was apart of it all. I felt every emotion from fear to excitement to frustration. I would recommend this to anyone that loves a bit of mystery/romance/Crime.

Great Book! I didn’t want it to end! Will definitely listen to it again. Definitely recommend listening to it.

I love it so so much.

can someone please talk to Disney or dream works or paramount or someone e to make this into a movie. I love joey and I love this book. listening to it I incisions every scene and every person. this needs to be a movie.

this is one on the best books. its a must buy. do yourself a favor and get it as you will find that you wont be able to stop listening

The book will have a strong appeal with middle school readers (12-15 year olds), but the non stop challenges and crises go on just a little too long. It's obvious that the aim is to write a sequel, but the abrupt finish will disappoint many readers.

I absolutely fell in love with this book. I am a massive fan of Joey and have been following him for a long time. This book and a very creative and unique story line, I am a quite big book worm and have never seen anything like it❤️

I wasn’t expecting this

The story is written by a youtuber who is interesting to watch. I finally decided to listen to his story. I was incredibly surprised at how amazing it was. The narrator really made me feel excited to hear the next word.

The storyline was dystopian and interesting enough but There were definitely some cringe worthy moments, an unnecessary love triangle and a lot of repeat language, but I was enjoying it. Up until that awful ending. What a complete let down. But on the flip side the voice actor was great.

Had potential, but missed the mark

I really wanted to like this book...it had all the potential to be a really awesome dystopian novel. It has a really interesting plot, but isn't delivered well and doesn't quite hit the mark. The first half of the book dragged on and was hard to stick with. Although there were plenty of opportunities at the beginning to develop the characters this did not happen, therefore the characters and their relationships were rushed and unbelievable. It wasn't for me, personally, and I don't have much interest in reading the sequel.

I would recommend this book to nearly everyone reader I truly enjoyed it, and it's getting harder for me to find a good book anymore.

This is an overall great listen/read/experience. I would recommend this book for almost anyone. I hope this wasn't the end and I'm patiently waiting for the next book. Really great work !

one of the best books i have listen to the detail was amazing along with the time period it was in i need more there has to be a movie or a second book or something!!!!!!

Love this book,but confused about the ending.

I really love the story line of the book, but I am kind of confused about the ending of the book. I also have a lot of questions that were not answered. like was Ash fine. what happened to Lark,and how did she get out,? Did Lachlan get back to the Underground? did they really poison her? was the whole forest and deer a Vision problem, or is the center lying about it all? what happens to Rowan?

You have to make a second book and a movie it can't end here! :3

It was such an easy book to listen to, I found myself finishing it in a single day! Amazing story line with so many unexpected turns, through out I was left wondering what was really going to happen. The characters were so real I could picture them beautifully in my mind. An extraordinarily executed book with an ended that has left me hungry for more.

To the amazing and brilliant Joey, this book is so good, that it has made me speechless. I would definitely recommend reading it to everybody. Can’t wait to start reading or listening the other two books.

Amazing book, full of adventure and being narrated by Sarah Grayson makes you feel like your part of the story!! Would highly recommend to anyone. love you joey, great work xx

The best book ive ever read hope there is a second one coming out! 😋

I found this book so FLIPPING GOOD it was so interesting and had the best story line !!!!! I have recommended this book to multiple of my friends
I was so happy when I found out that this was an audiobook because I’m not so good at reading :(
I Recommend this if you like sci-fi :D I love you Joey Keep up the great work :D P.s I LOVE THIS BOOK!!!!!!! :DDDD

I live this book, wish I could go over to book 2 and 3 but safely they are just in print😢😟

Good story, that does a solid job of building the post-end of the world setting. Nicely narrated. Only critic is it felt a little cold, not much emotion. Would listen to the next one if it gets audibled.

Never has a book made me imagine anything like this before it was amazing the futuristic nature was crazy to imagine can’t wait for the second book. If it ever comes !

This book brought tears to my eyes... best book I have ever ever read. Absolutely beautiful. I can't wait for another book honestly. I listened to it even when I got told not to because I was so attached to it. the reader really captured how I thought Rowan would have talked and the way joey describes the setting the characters everything. I really hoped Rowan would end up with Lark because she just cared so much about her and probably the reason joey did this was because he is gay but there is nothing wrong with that and I think that is what he is trying to prove. I really like the idea that is written behind this story. I would never have thought of it myself. very impressive Joey. I love this book so much that I am going to purchase the actual book and the sequels to this as I loved it so much.♥️♥️♥️

Exciting and gets you hooked

Such an intriguing and exciting book with characters you can’t not be inticed to listen for, I’m desperate to listen to the other two books in the series but aren’t currently available.