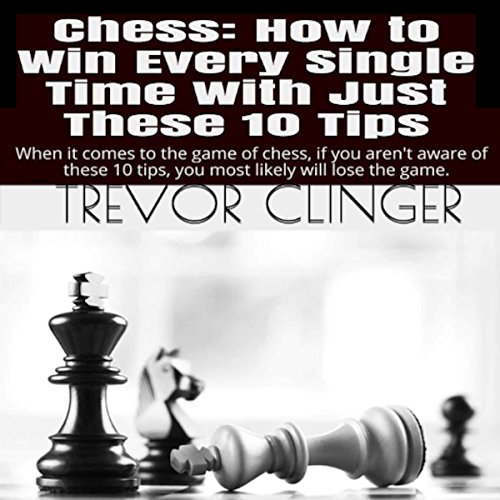 Chess: How to Win Every Single Time with Just These 10 Tips

Chess can be looked at as advanced checkers, or it can be looked at as a game of skill and strategy. Chess is considered to be a professional game, and some may consider it a sport. The more educated you are in how the game of chess works, the better your odds are of winning. These 10 tips will significantly aid in helping your win record go up substantially.

The author possess a bachelor's degree in business administration and an associate's degree in management technology.

What listeners say about Chess: How to Win Every Single Time with Just These 10 Tips

I'd recommend this to new players with little or no Chess knowledge, although the best way to learn is to play games with friends. All the information in here is good and true, but also very basic so experts steer clear. Still, I only spent $3 on this so I can't complain too much.

This is a waste of time

Do not get conned by the title. This essay (at 18 minutes it doesn't qualify as a book) is a very short and poorly written discussion on things like, "pay attention to your pieces and possible threats" which provides no practical insight for new or experienced chess players. No discussion on opening moves or errors to avoid, just broad generalizations. Yes, it is inexpensive, but in this case, you do not get what you paid for...

A great introduction to new Players

Clingers How to win everytime is a great text for noobie players. It does a great job explaining the game, and strategies that are time tested. This is perfect for someone who has learned chess from a family member or friend, i.e. given the basics, but never taught strategy before.

I daresay that it is not only useful for beginners, but it could be used to help refresh a veteran player as well. After listening to it, I realized hat there were movesI had not done in quite some time, and that I wanted to revist old strategems the next time I play my son.

Moore does a fine job narrating, and his tones help keep you focused as you listen to the various points that Clinger is making. This is a very useful tool for anyone interested in playing chess.

This audioboook gives a person a basic chess strategy, this is for a new player.

This is one of Trevor Clinger's best books. The narrator is perfect because he's smooth and confident. Do better at chess by getting this book!

The real Game of Thrones

I played chess once and found it amazing, but days later, forgot everything taught to me. I look forward to getting back into it and using this audiobook to help me excel and be most excellent. Thanks to the author and narrator for this one.

pretty good for the price. had some useful info. doesnt waste time on basics you probably already know

If you could sum up Chess: How to Win Every Single Time with Just These 10 Tips in three words, what would they be?

Loads of mileage in a compact style. A great deal of ground is covered in short, summary form. It was surprising that it had action, even though it was a description of chess-playing techniques. It felt as though you were on the board, figuring out strategy for your military troops.

What other book might you compare Chess: How to Win Every Single Time with Just These 10 Tips to and why?

Hard to say. The closest that I've heard was an audio on how to clean or organize your life which was a bit longer. However, I cannot recall the exact title of that one.

Which character – as performed by Rick Moore – was your favorite?

It was probably his emphasis on the Bishop who becomes rather important near the end of the game whereas the knight who jumps over other people is more critical in the earlier phases of the game development.

Your chess strategy may be the next winner!

So, there was a major emphasis on how the chess men would coordinate to present a unified attack. It would be welcome to have a bit more detail on how certain techniques, when developed organically within an overall strategy, would lead to success. For instance, when one player can utilize a "pin" which is where an opponent's chess character cannot move from its position due to the fact that it would place his or her King in jeopardy. This can be an effective technique, but your entire strategy in chess should not be based on that alone.

Having won several chess tournaments, I can gladly assert that this work is a building-block for greater thoughtfulness in your chess strategy.

Definitely for beginners. Covers good principles of playing chess. Doesn't go into tactics or openings or anything technical like that.