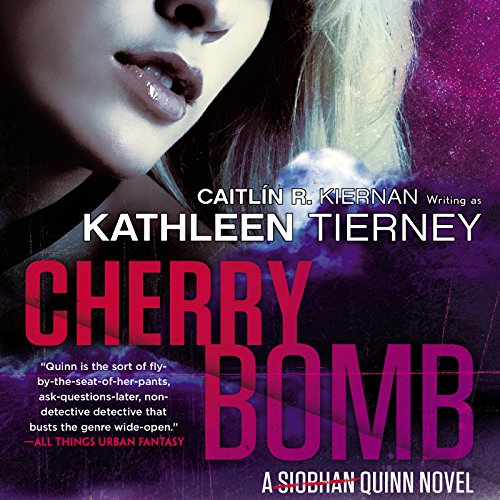 Meet Siobhan Quinn - half vampire, half werewolf, and retired monster hunter. Or so she thought. Three years have passed since Quinn turned her back on Providence, Rhode Island’s seedy supernatural underbelly, walking out on Mr. B. and taking a bus headed anywhere. She hoped her escape would give her some peace from the endless parade of horrors. But a dead girl who quarrels with the moon can't catch a break, and on the streets of Manhattan Quinn finds herself caught between a rock and a hard place. Again. What do you do when you're stuck in the middle of a three-million-year-old grudge match between the ghouls and the djinn and accidentally in possession of a hellish artifact that could turn the tide of the war, all the while being hunted by depraved half-ghoul twins intent on taking the object and ushering in a terrifying Dark Age? Especially when you've fallen in love with the woman who got you into this mess - and you ain't nobody’s hero….

What listeners say about Cherry Bomb

What a horrible way to continue this series!!!

My god it was like this book was written by a few high school students extremely disappointed. Such a letdown!!!!

I’m not really sure when I fully expected. The ending kind it was lackluster but the story overall was nice. It did start to drag into a historical bit for a chapter it seemed but all in all pretty good. The narration really kept me listening.

This is how the series dies

I loved the first book of this series. I thought the second one was good but how angry the main character was started to get tiring. This had a heroine who was just as angry, but now I needed to learn an entire lost religion and what sounds like 3-4 different languages. It ended up being just to much crammed into to little time. There was multiple times where we had to jump into the story of a book she was reading, then back out, then to a different dimension/hell/wtf, and it was just a little to hard to follow. I felt that this could have been better if it was laid out differently, but then it just got repetitive. I got to the point when I was annoyed every time they mentioned something in a different language, but then gave it 10 titles, all in different languages. seriously, just call it something and move on.

... I think I'm done with the series if any more come out.

Narrator is superb. Story is great. Hoping for more soon. Now I’m looking up the narrator to see what else she has done. As well as more storylines by Tierney

I loved the performance by Amber Benson. She really brought each of the characters to life. Each had their own voice that was unique and clearly recognizable. However, I really struggled to finish the story. As the main character pointed out: "info dump". The story had several of them. I normally enjoy a detailed storyline, but there was a very large and unfamiliar in-depth background mythology to work through as well as character background. I think it would have been easier to swallow in smaller bites over more books.